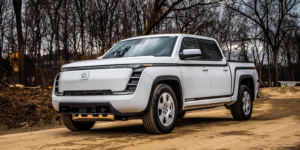 US electric car start-up Lordstown Motors has received full homologation for its first model Endurance, clearing the way for sales to begin. Certification for the electric pickup truck has been granted by both the federal EPA (Environmental Protection Agency) and the California CARB (California Air Resources Board).

Lordstown Motors says it is now starting to deliver the first units of the Endurance, which has been manufactured by Foxconn in Ohio since the end of September, to customers. The certificates from the EPA and CARB were the last of the necessary approvals. Previously, crash tests, among other things, were successfully completed.

However, production volume will increase only slowly due to supply chain constraints: Initially, only around 50 examples of the Lordstown Endurance will be produced in the current year, before up to 450 more units are to be built and delivered to customers in the first half of 2023.

“I am very proud of the Lordstown Motors and Foxconn EV Ohio team for their hard work, grit, and tenacity in achieving this milestone,” said Edward Hightower, CEO and President of Lordstown. “We are very excited to start delivering vehicles to our commercial fleet customers.”