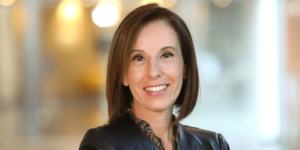 The founding head of Renault’s mobility division Mobilize, Clotilde Delbos, is leaving the company at the end of the year. Her successor as CEO will be former VW and Bosch manager Fedra Ribeiro, currently Chief Operating Officer of Mobilize.

Delbos is not only leaving Mobilize, but also Renault Group after ten years – where the manager is still Deputy CEO until the end of the year. ” I would like to express my warmest thanks to the employees of the Group who, despite the many crises of recent years, have made Renault the great company it is today. I believe that as CFO, then Deputy CEO of Renault Group and CEO of the Mobilize brand, I have contributed to the turnaround of the Group,” says Delbos herself. “Renault is now positioned at the forefront of the automotive industry, and I am convinced that Mobilize and its teams will play a leading role in it.”

Clotilde Delbos recently gave us an in-depth interview. Whether the strategic statements will be long-lasting will only become clear with the course of her successor Fedra Ribeiro, who takes over directly from 1 January. Riberio has been COO at Mobilize since November 2021. The Portuguese does not get a word in edgewise herself.

“I wish Clotilde success in her new projects, and I am sure that Fedra will continue to develop the activities of Mobilize Beyond Automotive with talent, supported by the experience of a great team around her,” says Luca de Meo, CEO of Renault Group.

It is not clear from the announcement where Delbos is headed. There does not seem to be any bad blood between the manager and the company, however. ” would like to thank Clotilde for the way she welcomed me into the Group two years ago and for her commitment to the Renault Group Board of Management,” de Meo continues. “Her professionalism has enabled the Mobilize brand to be launched with strength. The brand has become a reference in new mobilities, offering innovative services such as Mobilize Driver Solutions, Mobilize Insurance, Mobilize Charge Pass and the Mobilize Fast Charge network.”

Mobilize was first announced by de Meo at the beginning of 2021 and had presented its offer in more detail in June 2021. The Duo and Bento models announced in the course of this were then unveiled at the Paris Motor Show this October. In addition to the vehicles, a planned HPC network and various ride-hailing services are also part of the offer.

BMW iX review: How efficient is the BMW eSUV in real life?