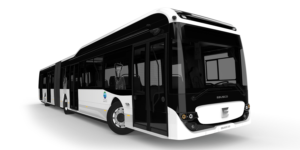 Ebusco presents an 18-metre articulated bus version of its Ebusco 3.0 electric model. Just like the 12-metre variant already available, the long Ebusco 3.0 is also supposed to score with a particularly low weight. The manufacturer claims to have already received several orders for the articulated bus.

The 18-metre version will have the same electric drive as the 12-metre Ebusco 3.0, i.e. a system consisting of two electric motors, each with a maximum output of 125 kW and a maximum total torque of 22,000 Nm. This drive can be combined with LFP batteries integrated in the floor in 350 kWh or 500 kWh versions (compared to 250 or 350 kWh for the 12-metre bus). With the 500 kWh, up to 700 kilometres of range should be possible, according to the accompanying company statement.

The high range is said to be due, among other things, to the design: Like its smaller counterpart, the 18-metre electric bus is largely made of composite materials, which should make it particularly light and efficient. Ebusco gives an unladen weight of 14,500 kilograms. “The composite side walls are injected with a foam that provides high thermal insulation. This high insulation value further reduces the energy consumption of the cooling and heating system and therefore has a positive effect on the range of the bus,” Ebusco informs. Due to the lightweight construction, all axles could also be equipped with a single tyre. “This makes it possible to create an extra-wide aisle from front to rear with a width of 90 centimetres, which increases the flow throughout the bus and makes the bus extra accessible also for people with physical disabilities, and for prams,” it adds. The Dutch name 150 passengers as the maximum number that can be carried.

It is striking that Ebusco does not give any information about the loading capacity of its new model. On the website, the only advantage is that “charging is only necessary overnight”. In this respect, Ebusco sticks to its line of argumentation already applied to the 12-metre bus: Since the Ebusco 3.0 with its high range is supposed to get through the whole day with one battery charge, from the manufacturer’s point of view no fast charging possibility via current collector is necessary – the Ebusco 3.0 is designed from the start for depot charging overnight.

Ebusco says it has already received several orders for the 18-metre bus, including for delivery to Oslo, Orebro Lan, Rouen and Växjö. To meet demand, Ebusco plans to add a dedicated line for articulated bus models to its production in Deurne, the Netherlands, next year.

Peter Bijvelds, CEO of Ebusco, comments: “I am immensely proud that we are presenting this ground-breaking 18-meter bus today. With about a third of our workforce working in R&D and engineering, we continuously manage to develop at high speed. This has now resulted in the lightest and most efficient articulated bus in the world.”