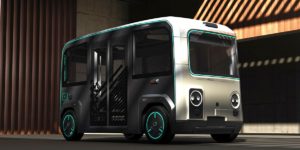 Holon, Benteler’s brand of autonomous shuttles announced in November 2022, has come to Las Vegas to show its first vehicle at the CES. The electric Holon Mover, designed by Pininfarina, can carry up to 15 passengers and does not need a driver, at least not all the time.

The Holon debut is in line with plans the German supplier announced a few months ago when renaming its business unit ‘Benteler EV Systems’ in ‘Holon’. The company had only been spun off at the end of 2021 to bundle and push the business with autonomous electric shuttles – internally called “People Movers” – with the first vehicle set to celebrate its premiere at CES 2023.

The Holon Mover on display in Vegas is designed for up to 15 passengers, “thereby closing the gap between personal and public transport concepts,” so Holon. This touch of privacy is expressed inside, where a “comfortable, discreetly offset seating arrangement” is intended, on the one hand, to give a feeling of privacy and, on the other hand, to meet all safety requirements.

Technologically, the EV shuttle operates automatically (Level 4) at a maximum speed of 60 km/h and has a range of approximately 290 kilometres.

More has been said about the design, which clearly differs from previous renderings. Holon describes it as “an asymmetrical design that combines maximum functionality with high recognition value”. Sketched by Pininfarina, which has also been on board from the beginning, “The vehicle design combines two character traits – friendly and inviting as well as technologically advanced and clear”, explains Silvio Pietro Angori, CEO of the renowned Italian design company.

The inclusivity also shows in functional details such as electric double-wing doors with photo-electric sensors and an automatically extending ramp with a lowering function for barrier-free access. Holon also mentions the automatic securing of wheelchairs inside the vehicle, and information is provided for the visually and audio impaired.

As for autonomy provided by Mobileye, the SAE Level 4 mover is debuting their commercial self-driving system. “Our autonomous driving system is designed to make ground-breaking mobility concepts possible – like the HOLON mover. Seeing the mover come to life is proof of the robustness and scalability of our approach,” says Johann Jungwirth, Senior Vice President, Autonomous Vehicles at Mobileye.

The Holon Mover features an “advanced sensing system that makes use of different redundant sensors,” so Holon, without saying which. The company also mentions novel mapping technology and a formal driving policy model.

At the CES, Holon added ideas for use cases. For example, clients may use the Holon Mover for on-demand services such as ride pooling, ride-hailing, and regular scheduled services.

For the latter, the company has already found a customer. Hamburger Hochbahn, Germany’s second-largest transport company known for its progressive approach, will launch a pilot project. Details have yet to be disclosed.

In the US, the mobility provider Beep will be responsible for implementing the first vehicles; the company has been named a Holon partner from the start. Again, details on the nature of the trial remain outstanding.

Design partner Pininfarina was also on board from the start, alongside Beep and Mobileye. Within the cooperation, Benteler is responsible for Holon development and production, set to start in 2025 in the USA. In the following years, additional production capacities are to be created in Europe and the Middle East/Asia, according to today’s statement.

ZF shows its next self-driving shuttle in Las Vegas