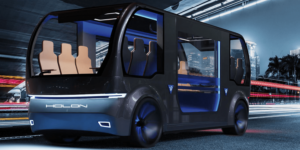 The German supplier Benteler has announced that it will rename its business unit ‘Benteler EV Systems’ in ‘Holon’. The unit had only been spun off at the end of 2021 to bundle and push the business with autonomous electric shuttles – the first vehicle is to celebrate its premiere at CES 2023.

The automotive supplier had already presented a specialized platform concept for so-called ‘people movers’ last year. In the development and deployment of autonomous e-shuttles, Holon works with various partners such as Pininfarina, Beep and Mobileye. Within the cooperation, Holon is responsible for the development and production of the People Mover, according to Benteler.

The shuttles are scheduled to go into production in 2025, initially in the USA. In addition to public transport companies, potential customers include municipalities as well as private institutions such as campuses, airports, national parks and others. Holon is also aiming for special autonomous transport variants in the future.

Holon is headed by Marco Kollmeier as managing director. Kollmeier was previously responsible for people movers at Benteler in his role as Vice President of the E-Mobility Business Unit and was involved in their development. “Autonomous movers are an essential part of tomorrow’s mobility – emission-free, comfortable, reliable and, above all, inclusive.” says Kollmeier. “Holon will be the first OEM for autonomous movers with the standards and scaling potential we know from the automotive industry.” The CEO also points to Benteler’s platform technology, vehicle expertise and partner network.

As Ralf Göttel, CEO of the Benteler Group, indicates, the establishment of Holon as a legally independent entity is intended to enable a “flexible response to changing customer requirements”. “In parallel with the traditional automotive business, innovative, digitally connected, and autonomous mobility services promise high growth in the coming years,” Göttel said. “With our engineering and manufacturing expertise, we are predestined to fill a gap in this hitherto strongly software-dominated field.”

To further increase growth potential, Benteler and Holon are also exploring the possibility of working with additional strategic partners and investors for the new company, according to the release. Initial pilot applications, including outside North America, are expected to be announced in the coming months and developed starting in 2023.

The term holon comes from Greek and means “a whole that is part of another whole”. At CES 2023 in Las Vegas, Holon wants to present “the world’s first autonomous mover that meets automotive standards there in January next year – i.e. leading in safety, driving comfort and production quality”.