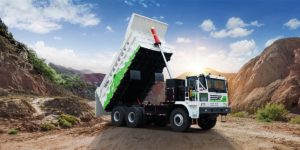 A limestone mine in China’s Shandong province will use 40 autonomous and fully electric tippers. Yutong Mining Equipment and Eacon, a technology company for autonomous driving, developed zero-emission vehicles and not just for a trial.

The first of the autonomous e-tippers for the project were handed over at the end of December, with the rest to follow by the end of 2023.

The miners will use the YTK90E from Yutong with a load capacity of 60 tonnes, which can handle gradients of up to 40 per cent and has LFP batteries with a total of 350 kWh. The manufacturer’s website further specifies dimensions of 9,400 x 3,400 x 4,150 metres, an unladen weight of 30 tonnes and a load capacity of 34 cubic metres. No information is available on the electric drive train.

Yutong Mining Equipment is an offshoot of the Chinese commercial vehicle manufacturer Yutong, which sees growing market potential in zero-emission mining vehicles. It is “the only battery-electric mining truck brand in the industry that can drive development with full intellectual property rights”, the company announced at the start of its cooperation with Eacon in November 2022. YME also already developed a pure electric wide-body mining truck and has previously formed a cooperation with Easy Control Intelligent Driving (EACON).

EACON, on the other hand, says it has significant on-site experience and developed “quantifiable standardised requirements regarding sensors and computing hardware,” among other things.

The new e-tippers are now being used at a limestone mining project of Shandong Honghe Baili Mining, with deliveries of all 40 trucks to commence throughout 2023.

Once delivered, the project will precede China’s “largest pure electric driverless transportation smart mine” – yet to be built, according to a report in International Mining. The specialist blog adds China’s mining industry has been moving towards zero-emissions mining fleets to meet the national double-carbon strategy.

China is not alone in the effort to decarbonise mining. Canada, in November 2022, announced a new federal tax credit to begin in the spring of 2023. The 30 per cent refundable tax credit will reportedly apply to hydrogen and electric heavy-duty equipment used in mining and construction industries, as well as charging and refuelling infrastructure.

Manufacturers such as Scania or Cummins, and Komatsu, among others, have started working on zero-emission mining equipment recently.