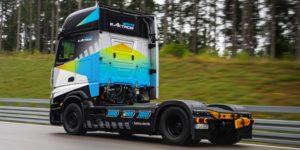 Tevex Logistics, the logistics subsidiary of the German butcher Tönnies Group, wants to use the battery-electric eActros LongHaul long-distance truck for food deliveries in the future. To this end, the company has now signed a letter of intent with Mercedes-Benz Trucks for the order of 50 units.

The declaration has now been signed during an official customer visit to Daimler Truck headquarters, according to the truck manufacturer. On the part of Daimler Truck, Stina Fagerman, Head of Marketing, Sales and Services at Mercedes-Benz Trucks signed the document, and on the part of the customer, both Tevex Managing Director Dirk Mutlak and Clemens Tönnies, Managing Partner of the Tönnies Group of Companies, were the signatories.

The partners do not give any further details on the planned use in the announcement. It has been clear since the IAA 2021 that the eActros LongHaul with a range of around 500 kilometres, including the MCS charging standard, is to go into series production in 2024. We have compiled all other known data on the vehicle in this article.

What is clear, however, is that Tevex will use the vehicles in particularly demanding, temperature-controlled food transport. The Tönnies Group is known for its meat products, which have to be transported refrigerated – which increases the energy demand on board an electric vehicle.

By 2030, the Tönnies Group from Rheda-Wiedenbrück wants to become one of the most sustainable food producers in Europe as part of its ‘t30’ agenda. To achieve this, the company has defined measurable and concrete goals for the coming years – including the reduction of CO2 emissions in logistics per tour. With the use of the first e-truck from Mercedes-Benz Trucks as well as further purchases and conversions, the logistics subsidiary has already succeeded in achieving about a third of the targets, according to the Mercedes release.

Previously, the Hegelmann Group and Dachser had already announced their intentions to purchase 50 units each of the eActros LongHaul. It remains to be seen when exactly these pilot customers will receive the first vehicles.