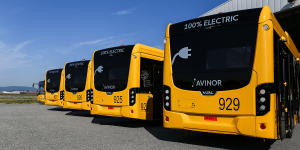 The city of Oslo has launched a grant scheme to support the installation of charging stations for electric trucks and buses in the Norwegian capital. The first round of funding through the ‘Climate and Energy Fund’ sees Oslo carrying up to 80 per cent of installation costs.

So far, 28 new fast-charging stations for electric trucks and buses in Oslo have been granted 25 million Norwegian kroner (about €2.3 mn), said 80% of the cost. Application for this first round ended on 01 December 2022. The deadline for the second round is 01 March.

Fastcharge and ST1 emerged as winners and will implement the 28 new fast chargers (“hurtigladere” in Norwegian). The statement does not mention how many sites there will be, but three seem confirmed, with at least one other under construction at Filipstad. The heavy vehicle charge hubs already up are located in Rommen, Alnabru and Åsland in Søndre Nordstrand, Oslo’s southernmost district.

Technology adviser at the Climate Agency, Bergljot Tjønn, said it was “fun that Oslo now has three very different charging stations for heavy vehicles”. One is at an existing Shell station, while another is at an upcoming 24-hour rest area. The last one is on a plot of land used for goods deliveries with heavy vehicles and industrial equipment storage.

The Climate and Energy Fund created the competition-based grant scheme in 2022 to ensure that fast charging for heavy vehicles is publicly available. City Council for Environment and Transport, Sirin Stav, said that without the funding, “We could end up in a mess where companies do not invest in electric trucks because they are not allowed to charge along the road, and no one will build charging stations if there are no electric trucks on the roads”.

Petter Nergård Christiansen, the transport advisor at the Norwegian Climate Agency, added it was “positive and important that so many people want to build charging stations that are specially adapted to heavy vehicles, and thus contribute to the fact that trucks can also take the step towards becoming emission-free.”

Six companies submitted eight applications in the first round to build charging stations for heavy vehicles.

Bård Granerud, establishment manager at St1 that won funding for two installations, found it “incredibly positive that the municipality and the agency are so forward-looking and efficient when they create a grant scheme like this”.

The Oslo municipality runs the Climate Agency, with KlimaOslo informing the public as the agency’s editorial arm. The agency is set up to be the driving force to achieve Oslo’s climate goals through cooperation with other parts of the municipality, the population, businesses, knowledge communities, organizations and other public authorities. Oslo targets to become an emission-free city by 2030.