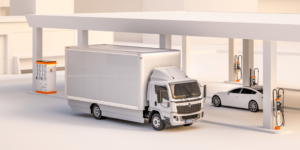 A consortium of three Nordic companies wants to implement a nationwide fast-charging network for electric trucks in Sweden. The aim is to provide infrastructure for some of the 85,000 heavy trucks currently using Swedish roads, that will need charging facilities if they are to convert to electric power.

The consortium is made up of Nimbnet, a Swedish operator of charging stations, Finnish charging hardware manufacturer Kempower and Finnish charging infrastructure service provider Virta have joined forces to implement the project.

The first truck fast charging stations are to be built in Gothenburg, Söderhamn, Sundsvall and Nordmaling with funding from the Swedish energy agency Energimyndigheten and should be operational by the end of 2023. The three Nordic companies have not yet revealed how many chargers they are aiming to install in total.

The charging columns are made by Kempower with up to 350 kW of continuous power, designed to supply both trucks and cars via CCS connections. These are to be operated by Nimbnet. A reservation system provided by Nimbnet will help truck operators plan reliable delivery routes in advance. Nimbnet also aims to fill any key geographic gaps, saying that municipalities are encouraged to contact them with proposals for suitable underserved locations.

Compared to the usual HPC charging stations for electric cars, the truck sites will be built in such a way that even the “longest heavy trucks” can easily access the Kempower columns. The manufacturer already offers fast-charging products that require only a very narrow unit to be built at the parking space itself while the rest of the technology is outsourced to control cabinets.

At the Nimbnet stations, truck drivers will be able to start and settle the charging process via the Virta Mobile app, RFID tags and cards, credit cards or even Plug&Charge-compatible vehicles.

“Heavy trucks contribute a quarter of all road transport CO2 emissions and are key to tackling climate change. As all the major truck manufacturers are quickly electrifying their fleets and 56 per cent of all heavy trucks travel less than 250 kilometers each day, range is no longer the issue it once was,” said Torbjörn Nordling, Project Supervisor at Nimbnet. “Most heavy trucks could be replaced with electric ones, but the current charging infrastructure does not yet serve their needs. Nimbnet’s Virta-powered network is designed with their needs in mind from the very beginning”

The consortium says it is assuring electric truck and car drivers that the new network will offer flexible pricing based on the current electricity price on the Nord Pool electricity market. As a mechanism to reduce strain on local grids, the price of electricity along the network will be regulated according to the grid load in each area. Drivers will be able to find lower prices in areas will less strain via the app to regulate peaks in demand.

Also in the Nordic region this week, the city of Oslo launched a grant scheme to support the installation of charging stations for electric trucks and buses in the Norwegian capital. The first round of funding through the ‘Climate and Energy Fund’ sees Oslo carrying up to 80 per cent of installation costs for the construction of 28 new fast-charging stations for electric trucks and buses.