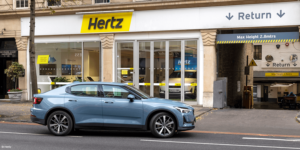 Hertz and the ride-hailing company Uber are expanding their US partnership to Europe. Accordingly, Hertz wants to provide up to 25,000 electric cars for Uber drivers in European capitals by 2025. London, Paris and Amsterdam were explicitly mentioned so far.

The European expansion of the partnership will first become visible in London: There, the fleet of electric vehicles at Uber is to begin this month. This is according to an announcement by Hertz. The first project location is also the European headquarters of the car rental company. Later this year and in subsequent years, the roll-out will continue in “other European capitals such as Paris and Amsterdam”. Berlin is not mentioned, but with this kind of wording it is not excluded. Further details will be announced in due course, according to the Hertz announcement.

Hertz and Uber do not give details of which models will be used in the 25,000 electric car offensive. The only hint is the statement that models from Tesla and Polestar will also be considered in the procurement. Hertz calls the partnership with Uber a “key element of its strategy to build one of the world’s largest fleets of electric vehicles”. For Uber, it is another step towards realising its self-imposed commitment to become a zero-emission platform in Europe and North America by 2030. In London, this goal is already to be achieved by 2025.

In the US, the collaboration between Hertz and Uber is already bearing fruit: “To date, nearly 50,000 drivers have rented a Tesla through this program, completing more than 24 million fully-electric trips and over 260 million electric miles,” Hertz writes. The two companies announced the said programme in October 2021 as follows: “Participating drivers receive a preferred weekly rate for Hertz rentals, which includes insurance, basic maintenance and unlimited miles.”

The partner companies do not provide details on rental conditions in Europe. Stephen Scherr, CEO of Hertz, left it at a general statement: “By making EVs available to rideshare drivers, we will not only contribute to reducing emissions in European cities but also expand opportunities for people to experience the benefits of electrification. As Hertz invests to create one of the largest EV fleets globally, our Uber partnership will ensure that we continue to lead in the rapidly-changing mobility landscape across Europe.”

Dara Khosrowshahi, CEO of Uber, added: “As the largest mobility platform in the world, we know that our impact goes beyond our technology. Climate change is the most urgent global challenge which we must all tackle together – now is the time to accelerate. Expanding our partnership with Hertz into Europe will significantly boost our transition to zero-emissions, helping drivers reduce running costs and cleaning up urban transport. We aim to become a 100% electric platform across Europe by 2030.”

In North America, Hertz made headlines when the company ordered up to 340,000 electric cars from Tesla, Polestar and General Motors over the past year. Not much is known yet about the car rental company’s European ambitions.