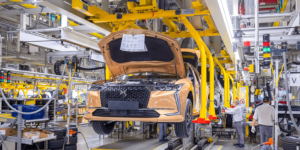 Automotive group Stellantis and lithium producer Vulcan Energy are exploring the use of geothermal energy to decarbonise the Stellantis car plant in Rüsselsheim, Germany, where the DS 4 and Opel Astra are built.

Stellantis says geothermal energy could meet a significant portion of the industrial site’s annual energy needs starting in 2025. Vulcan Energy is currently filtering lithium from geothermal brine in the Upper Rhine Graben, among other projects, and thus has expertise with the technology. Both the Astra and the DS 4, including their electric versions, come off the production line in Rüsselsheim.

The automotive group and the lithium producer have signed a term sheet that should advance the automaker’s first project investigating the use of geothermal energy. The term sheet covers the first phase of a multi-phase project to develop new geothermal projects with the goal of decarbonising the company’s localised energy mix.

This first phase of the project, located in the northernmost part of Vulcan’s focus area in the Upper Rhine Valley in Germany, will include a preliminary feasibility study conducted by Vulcan for the construction of geothermal plants for Stellantis’ facility. If this study is positive, a second phase will include initial drilling and further studies. Stellantis intends to finance half of the project development in the process, which it says will also supported by the local government.

The result is expected to be a geothermal generation facility that will produce clean electricity that will be fed into the grid in accordance with the German Renewable Energy Sources Act (EEG) for its own use, but also to feed into the local grid. The heat generated at the same time is to be transferred to Stellantis’ production facility, which is Opel’s main plant in Rüsselsheim.

“Vulcan’s core mission is decarbonisation, through renewable energy and carbon neutral, zero fossil fuels lithium supply,” said Vulcan Managing Director and CEO, Dr Francis Wedin. He pointed out that Vulcan is one Stellantis’ largest suppliers of lithium, and Stellantis is one of Vulcan’s major shareholders. Vulcan wants to support the automaker to decarbonize its operations in Europe, he says. “While we remain focused on our geothermal-lithium developments in the centre of the Upper Rhine Valley Brine Field, this project is a complementary opportunity to expand our development pipeline to some of the outer-lying areas in the Upper Rhine Valley, supported by industrial partners like Stellantis.” the CEO revealed.

Seres 5 to be available in Europe from March