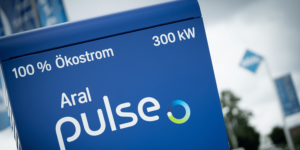 Aral pulse has opened a charging corridor for electric trucks along 600 kilometres of the Rhine-Alpine Corridor. The busy logistics route currently connects two major metropolitan regions with six charge hubs. However, the corridor is not yet complete.

At the opening, the charging corridor includes 300 kW stations adapted to the dimensions of trucks at the Aral petrol stations in Schwegenheim, Bensheim, Rüsselsheim, Rheinböllen, Düsseldorf and Dortmund. In the coming months, the charging stations in Bad Honnef on the A3 motorway and Cologne will complete the route.

As Aral explained when asked by electrive, two charging stations per location, each with two charge points, are structurally designed so that heavy commercial vehicles can easily access them. However, these four CCS charge points are not reserved for trucks but can also be used by electric cars.

The opening ceremony for the electric truck corridor took place at the Aral pit stop in Bensheim, Hesse, located on the B47 road near the Bensheim exit of the A5 motorway. Aral pulse charging stations for electric cars have already been found at the site for some time, and Ewe Go also operates its HPC columns in the adjacent car park of the McDonald’s branch. Unlike the new truck charging stations, however, these cannot be accessed by heavy goods vehicles.

The fact that such a charging infrastructure is crucial for the use of electric trucks in the demanding logistics business is emphasised by Alexander Junge, who is responsible for e-mobility on the Aral board. “The discussion about e-mobility is currently very much focused on the passenger car sector. But medium- and heavy-duty traffic is also at a decisive turning point. This is shown in particular by the announcements of the manufacturers,” says Junge. “Our strategy is designed to meet this demand with a corresponding offer. The first European charging corridor is an important milestone on this path, as it enables us to charge e-trucks, which must return to their home depot for charging.”

Johannes Pallasch, the spokesman for the management team of the National Charging Infrastructure Control Centre, was also on-site in Bensheim. “To significantly reduce CO2 emissions in road freight transport, electric trucks will play a central role in regional transport and long-distance transport. With today’s opening, Aral is taking an important step in this direction,” Pallasch said. “As with passenger cars, the switch to e-mobility can only succeed with a reliable charging infrastructure that meets demand. And we’re moving fast because the potential for climate protection is huge, and heavy-duty battery-electric trucks are hitting the road now.” He also refers to the upcoming tender for a Germany-wide initial truck charging network along the long-distance transport axes, which “complements the initiatives of the companies”.


As mentioned, the Aral stations are still equipped with CCS charging stations. The legally required driver break of 45 minutes is enough to recharge a range of about 200 kilometres. A solution suitable for heavy long-distance traffic, where electricity for the next 400 kilometres has to be recharged in 45 minutes, will only be offered by the coming MCS, the standard for so-called megawatt charging.

In today’s statement, Aral also refers directly to its partner Daimler Truck, which already offers the Mercedes eActros, a heavy-duty truck for distribution transport. The eActros LongHaul had its premiere as a prototype at the IAA Transportation and is expected to be ready for series production by 2024 – albeit with MCS charging options. Interesting in this context with Daimler Truck is the charging station at the Autohof in Schwegenheim on the B9 in southern Palatinate: the federal highway leads to the Daimler Truck plant in Wörth, where not only the eActros is built, but also, as reported, all delivery traffic is to be done by e-truck by 2026.

New JV focuses on truck charging at largest US ports