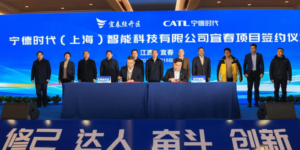 CATL plans to build the first production facility for its CATL Integrated Intelligent Chassis (CIIC) in Yichun in the Chinese province of Jiangxi and has signed an agreement with the city to this effect. There are no details yet on the schedule and scope of production.

The CIIC was first mentioned in early November 2022 with VinFast as a potential customer. CATL also recently announced that Neta is joining as a strategic partner and future customer in the development of the CIIC. Using cell-to-chassis (CTC) technology, the CIIC integrates the key components of the battery and other systems into the floor of the vehicle, eliminating the need for separate battery packs.

CATL Intelligent Technology, a wholly-owned subsidiary of the group, is responsible for the design, production, sales and services related to the chassis. It is also the contractor in Yichun for the construction of the aforementioned plant. “This move will effectively promote the landing of CTC innovative technologies and skateboard chassis products in the Ningde era, and contribute to the high-quality development of the new energy industry,” CATL commented in a terse official statement.

The skateboard chassis became known when CATL announced that it would supply Vietnamese carmaker VinFast with a complete undercarriage for its electric cars in the future. VinFast was announced as the first customer, but it is still unclear which carmaker will be the first to be supplied – there is still no definite information on this. The second customer that has already been made public – Neta – wrote in an announcement almost a fortnight ago that it was the first company among Chinese EV start-ups to offer a vehicle based on the CIIC.

CATL is already a household name in Yichun: the Chinese battery cell manufacturer secured mining rights for a lithium mine there last year for 865 million yuan (123 million euros). According to CATL, the mine is expected to yield 2.66 million tonnes of lithium metal oxide. In future, the battery manufacturer will be able to process the material extracted there directly on site: CATL is also building a battery factory in Yichun with an annual production capacity of 50 GWh. A cooperation agreement to this effect was signed with the Yichun municipal government in September 2021.