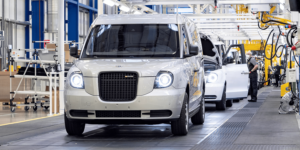 The Geely subsidiary LEVC (London Electric Vehicle Company) is facing a future as a pure electric vehicle manufacturer, according to a media report. In order to make this change, parent company Geely is said to be planning a major investment.

LEVC had already briefly hinted at the planned transformation into a pure electric vehicle manufacturer at the end of December and announced that it would publish more details on the new strategy in the first quarter of 2023. The news agency Reuters already mentions some key points of the strategy and refers to statements by managers of the company. According to this, there is to be said investment by Geely, the extent of which, however, will only be announced at a later date. According to the news agency, the Chinese company has so far invested 500 million pounds in LEVC – the equivalent of around 570 million euros. Geely took full control of LEVC in 2013.

LEVC is now said to be discussing a range of commercial vehicle and passenger car models on a common electric platform. According to LEVC CEO Chris Allen, quoted in the Reuters report, his company can draw on other group brands that already have electric vehicles to “move forward quickly and flexibly”. The company already uses an infotainment system, software and steering wheel developed by Volvo, among others.

Within five years, LEVC “could” have a full range of electric vehicles on the road and transform into a high-volume, all-electric brand with a range of commercial and passenger vehicles, according to quintessential statements from LEVC’s senior management. Verbatim, Allen is reported to have said that “there is tremendous value in our product that has never really been exploited.” He said the aim was to make LEVC a much better known brand on a global scale and to expand the product offering to as many areas as possible.

So far, LEVC offers the TX taxi and the VN5 van derived from it. The duo can run purely on electricity, but has a combustion engine as a range extender. At its plant in Coventry, UK, LEVC is currently able to build 3,000 taxis per year in a single-shift operation. However, this number should easily be increased to 20,000, and the manufacturer could also rely on production in China, as Lotus has done, Reuters quotes from LEVC management.

In the course of the planned transformation into a manufacturer of purely electric vehicles, LEVC and Geely also want to bring external investors on board and cooperate with other vehicle manufacturers to develop new technologies, according to the report.

LEVC’s business has been hit hard by the Covid 19 pandemic in recent years. As recently as October, 140 employees were laid off. This cut came under the new CEO Alex Nan, who succeeded Jörg Hofmann in this position in mid-2022.

First indications of prices and specs for the Kia EV9