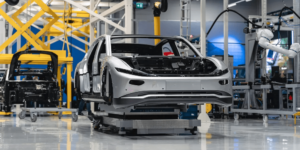 The Dutch solar car start-up Lightyear has stopped production of its first model Lightyear 0 and now wants to focus its resources entirely on the second model Lightyear 2. However, there is more behind this step than strategic reorientation.

“This decision was not taken lightly as it impacts all who embarked on this journey with us,” the company wrote in the statement. “Those are of course our own employees, who work day in day out to make solar mobility a reality, alongside our investors, clients, suppliers and the government.”

Production of the Lightyear 0 had started only a few weeks ago at contract manufacturer Valmet Automotive in Finland – with only one unit per week. The gradual increase in production announced for the first quarter will now no longer materialise. But this also means that with one vehicle per week, only a single-digit number of Lightyear 0 series vehicles have been built so far.

It is not clear from the press release how the company intends to deal with the customers who ordered one of the 250,000 euro solar-powered sedans. The only thing that is clear is that they will not receive the car they ordered.

The company’s focus is now fully on the solar-powered Lightyear 2, intended for the mass market, of which the leasing provider Arval had recently reserved 10,000 units and for which a total of more than 21,000 pre-orders have been received so far. But: Whether the step to stop the expensive production of the Lightyear 0 will be enough to secure the financing of the Lightyear 2 remains open.

CEO and co-founder Lex Hoefsloot is at least optimistic. “We hope to conclude some key investments in the coming weeks in order to scale up to Lightyear 2, an affordable solar electric vehicle available for a wider audience,” Hoefsloot said. “Therefore we strongly believe that the decision taken is the best way forward in achieving our vision, providing clean mobility for everyone, everywhere.”

Nissan invests in electric drive production in the USA