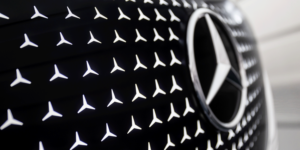 Mercedes-Benz has announced various new appointments in top management, affecting Level 1 below the Group Board of Management. Among others, Christoph Starzynski, currently Head of Development Electric Drive, will assume responsibility for the overall vehicle development of all Mercedes-Benz passenger car series as of 1 July 2023. 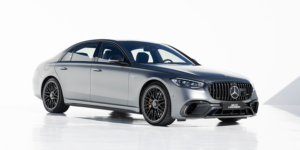 Following the plug-in hybrid offshoot of the C-Class, Mercedes-AMG is now also using the technology in the S-Class. The corresponding model is called the Mercedes-AMG S 63 E Performance and offers a system output of 590 kW. 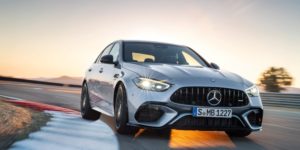 Mercedes-AMG has presented the C 63 S E Performance, a 500 kW plug-in hybrid offshoot of the C-Class with know-how from Formula 1, which will be launched as a sedan and estate. However, the development of the electric part of the powertrain was clearly focused on boosting performance. 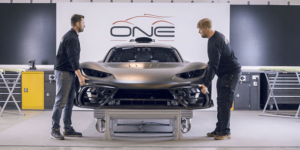 Mercedes launches production of the hybrid Hypercar One

Mercedes-AMG has started small-scale production of the hybrid-electric Hypercar One with Formula 1 technology. A total of 275 examples of the Mercedes-AMG One will now be built, the first of which are to be delivered to customers during the second half of 2022. 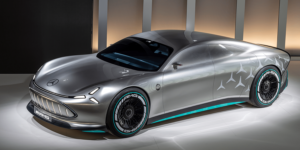 Mercedes-AMG provides a glimpse of its all-electric future with a design study. The Vision AMG is a four-door electric coupé with the independent AMG.EA platform – currently being developed for the carmaker’s all-electric performance models in Affalterbach, just north-east of Stuttgart. 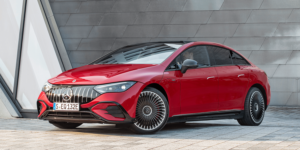 Mercedes-Benz has opened the order books for the first variants of the EQE, which will be in dealerships from the end of April. The electric sedan can be ordered now as the Mercedes-Benz EQE 350+ as well as the Mercedes-AMG EQE 43 4MATIC at prices starting at €70,626.50 and €103,827.50 respectively. 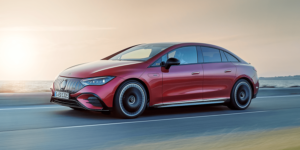 Following the EQS, Mercedes-AMG is expanding its electric car family with two models based on the smaller EQE. Both the EQE 43 4MATIC and EQE 53 4MATIC+ from AMG rely on an electric all-wheel-drive system with a “performance-oriented” design. 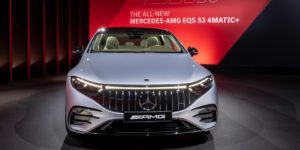 Mercedes is presenting the AMG EQS 53 4MATIC+ at the IAA Mobility in Munich. The AMG version of the electric luxury sedan is in the performance class of a Porsche Taycan Turbo S and aims to score with both dynamics and luxurious ambience. 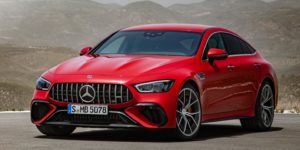 With the Mercedes-AMG GT 63 S E Performance, Daimler has presented its first high-performance plug-in hybrid. The vehicle has a system output of 620 kW – the purely electric range, however, is just twelve kilometres. 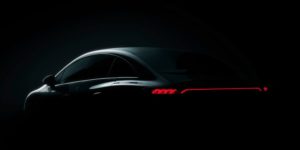 Daimler to present the EQE at the IAA

Daimler is planning eight premieres at the IAA Mobility from 7 to 12 September in Munich, five of which are fully electrically powered models. Among them is the electric E-Class counterpart EQE, but also a European premiere of an already presented electric model. 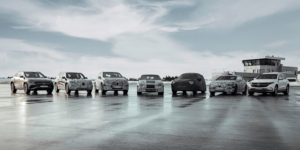 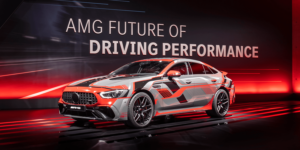 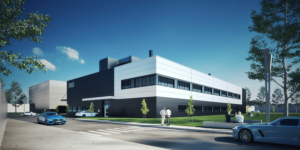 Mercedes-AMG is building a modern test centre for the development of electrified high-performance drives and electrical components at its headquarters in Affalterbach. The official groundbreaking ceremony for the new ‘Technikum’ took place on Thursday. 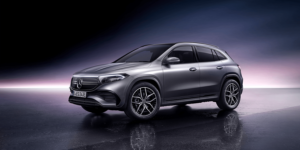 Mercedes-AMG is apparently planning performance variants of the electric models EQA, EQB, EQS and EQE. Neither the performance data nor has the schedule for the market launch has been revealed.

Mercedes-Benz has announced that it will significantly increase its stake in the struggling British manufacturer Aston Martin Lagonda from what is currently 2.6 per cent to a maximum of 20 per cent. In return, the British company is to receive hybrid and electric drive trains from Mercedes. 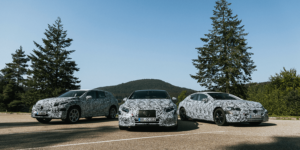 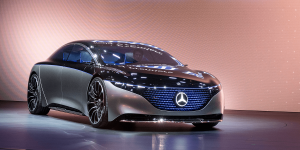 After a message claiming that “If this summer wasn’t hot enough for you, the Mercedes-AMG GLA 45 4Matic will turn the heat up”, many criticized the company for the environmental implications of the slogan. 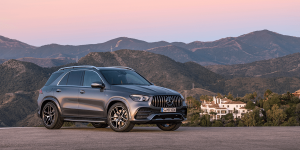 Mercedes-AMG will optionally offer all future models as plug-in hybrids. This was explained by Frank Overmeyer, emissions strategist at Daimler. Mercedes-AMG currently offers a range of mild hybrid models, but will not continue on this path. 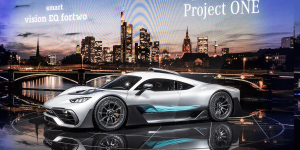 Mercedes is known for fast and luxurious cars. Their newest marketing strategy shows their concept progress crawling along, but still moving forward.

Reading tip: A new highway was part of Tesla’s deal with Nevada when they chose Sparks for their first Gigafactory. Now the EV maker brought a Model 3 to inaugurate the ‘game changer’ highway.
electrek.co, teslarati.com

Video tip: Lewis Hamilton took over the steering wheel in Mercedes-AMG F1-powered hypercar to shoot a short teaser video prior to its debut at the IAA.
carscoops.com, insideevs.com

Nissan sells battery business to GSR: What has been widely expected, is about to be realised: Nissan officially confirms that it will sell its complete battery business to Chinese financial investor GSR Capital in order to focus solely on EV designing and production. The package includes the battery unit AESC with its plants in Smyrna (Tennessee) and Sunderland (UK) as well as parts of the carmaker’s Japan-based battery production in Oppama, Atsugi and Zama. According to Nissan, the deal could be signed before the year’s end.
europe.autonews.com, newsroom.nissan-global.com

VW introduces premiums to buyers trading in an older diesel model – the step is part of the deal agreed on with German politicians at the “diesel summit” last week. Thus, buyers of VW cars trading in diesel models with Euro 1 to Euro 4 standards are benefiting from an environmental bonus of up to 10,000 euros. Parallel, Volkswagen offers so-called “future premiums” between 1,000 and 2,380 euros to buyers of alternatively powered cars. Both incentives are going to be granted solely in Germany and until the year’s end. Who trades in a VW Golf and buys an e-Golf, benefits for example of 11,760 euros – consisting of 5,000 euros environmental bonus, 2,380 euros future premium and the usual state subsidy, in this case 4,380 euros.
autoblog.com, volkswagen-media-services.com

Also Audi offers trade-in incentives: Similar to VW’s bonus system, Audi introduces a premium of 3,000 to 10,000 euros for buyers of new Audi cars trading in their old diesels in 2017 within Germany. Who buys a PHEV benefits also from Audi’s decision to double its share of the state subsidy programme from 1,500 to 3,000 euros.
audi-mediacenter.com

Toyota to launch more hybrids in Europe: The Japanese carmaker seeks to extend its hybrid vehicle line-up in order to benefit from the current diesel anxiety in Europe, reports Nikkei referring to Toyota Europe CEO Johan van Zyl. Thus, at the latest 2020, Toyota wants to offer every model in minimum two hybrid versions, pushing the share of hybrid cars towards 50 percent of its overall sales in this region.
asia.nikkei.com

Mercedes-AMG to show CLS hybrid: Mid-2018, the Daimler subsidiary intends to launch its next-gen CLS, the first model of a new series of AMG hybrid models, according to Autocar. It will be powered by AMG’s 3.0-litre straight-six engine and a 50kW electric motor and could be presented at the L.A. Auto Show in November. Further models with hybrid drive are to follow step-by-step.
autocar.co.uk

Fresh money for Future Mobility: The Chinese start-up has raised additional 200m dollars in its latest funding round. Supported by Foxconn, Tencent as well as Harmony Auto and led by former BMW i manager Carsten Breitfeld, the company seeks to present its first concepts before the year’s end and to kick-off serial EV production by 2019.
chinamoneynetwork.com

Hybrid Jeep in 2017? Jeep is working on its new Wrangler for 2017 and is considering a hybrid variant, though no decision has been made yet. And Jeep seems to care less about saving petrol than about adding initial torque by adding an electric motor and optimising the crawl ratio.
autoexpress.co.uk 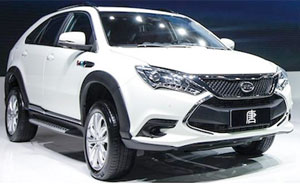 BYD Tang in the starting blocks: The Chinese manufacturer is introducing its hybrid SUV Tang on its home market. The 354 hp strong vehicle is said to offer an all-electric range of up to 85 km and comes with a price tag of around 250.000 yuan (40,200 dollars), after green-car subsidies.
carnewschina.com

CCS included: BMW now offers its i3 with CCS rapid-charging capability as standard in the U.S. – an upgrade that still costed 700 dollars in 2014. Heated seats are also standard now. On the other hand, the price of the base MSPR went up by 1,000 dollars. Meanwhile, Volkswagen announced that all future plug-ins in the U.S. will come with CCS quick charging as standard.
insideevs.com (BMW), transportevolved.com (VW)

AMG super hybrid in the making? After speaking to AMG head Tobias Moers, Motor Trend is speculating that a hybrid hypercar to take on the Porsche 918, LaFerrari and McLaren P1 could be in the pipeline. Moers’ lips remained sealed and the speculations unconfirmed.
motortrend.com

Bosch eBike Systems kicks off in the U.S.: The German-based company is ready for a new adventure, opening the U.S. headquarters for its e-bike business division in Irvine, California. The Bosch Group launched its e-bike unit in 2009 and now holds large market shares in Europe and Japan.
bike-eu.com, bicycleretailer.com