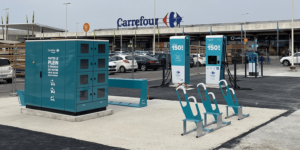 Carrefour expands charging to all stores

The French retailer Carrefour is expanding the development of charging infrastructure to all of its shops. By 2025, a total of 5,000 publicly accessible charging points are to be put into operation at over 700 Carrefour stores in France. 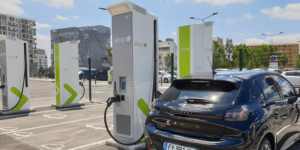 Allego is to build a total of more than 2,000 fast-charging points for electric cars with outputs between 75 and 300 kW at more than 200 locations in France by 2023 for the French retailer Carrefour. In addition to building the network, Allego will also be responsible for its operation and maintenance over a period […]

More electric mail in Norway: The Norwegian postal service further expands its fleet of 900 electric vehicles, ordering another 240 Renault Kangoo Maxi Z.E. The electrification is part of the Posten Norge’s strategy targeting a 40 percent reduction in its CO2 emissions by 2020 (we reported).
automotiveworld.com, renault.com

Essex gets H2 filling station: Company ITM Power now received permission for the construction of the hydrogen fuelling station. It will be located near the A13 road in Rainham, Essex, and is part of the EU-funded HyFive project. The station will open to the public in spring 2016.
hydrogenfuelnews.com, proactiveinvestors.com

New Supercharger Down Under: Tesla installed another one of its fast-charging stations in Gundagai, Australia. The strategic location completes the Sydney to Melbourne route along the Hume Highway, one of Australia’s major inter-city highways.
themotorreport.com.au