The British hyper car that had seen the spotlight last year in Geneva is gearing up for production. A new company called Dendrobium Automotive has been set up to follow on from Vanda Electrics. The Dendrobium is being developed with Williams Advanced Engineering.

Swedish Gigafactory: Former Tesla executives and their new business North Volt have brought forward their plan to build a large battery factory in Sweden themselves rather than waiting for their former boss. They target a battery price below $100/kWh with the facility that will either be in Finland or Sweden. North Volt reckons construction will cost 40bn kroner (about 4bn euros) but found early backers in Vinnova and the Swedish Energy Agency and Vattenfall is now on board as well. The next two years will be dedicated to look for location and financing in order to start construction in 2019. Production could then start in 2020 and ramp up to 32 GWh in 2023.
businessgreen.com, electrek.co, vattenfall.com 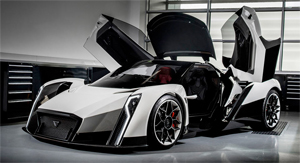 Super car from Singapore: Vanda Electrics present the Dendrobium in Geneva, an electric racer developed together with Williams Advanced Engineering. Four electric motors make for 320 kph tops. Depending on reactions at the Salon, this hyper car could see the light of day in a mini-series by 2020.
carscoops.com

ECO COM’BAT is the latest EU funded project that combines forces of ten partners under the lead of Fraunhofer ISC to develop better, lighter, and more durable Li-ion packs – in short: high-voltage batteries. Another requirement is sustainability and so the team will look to reduce rare or even critical materials in their “Ecological Composites for High-Efficient Li-Ion Batteries” (ECO COM’BAT). One surrogate is low-cobalt NMC, carbon nanotubes another promising strand to look at. The project reaches from research over to upscaling and recycling methods.
isc.fraunhofer.de