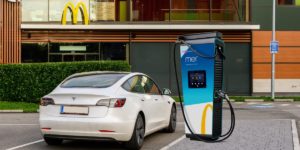 McDonald’s Austria has commissioned Statkraft’s e-mobility outlet Mer to build fast-charging stations. By the end of 2023, the partners want to equip all McDonald’s Austria branches that have a parking lot with ultra-rapid chargers delivering 150 or up to 300 kW. 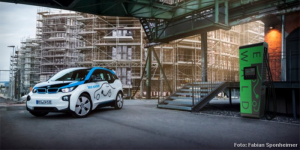 The Norwegian utility Stakraft has acquired the electric vehicle charging company E-Wald GmbH. The acquisition is to strengthens Statkraft’s position in the German and European charging market and follows similar deals made earlier this year.

U.S. funds e-bus development: The U.S. Department of Transportation’s Federal Transit Administration (FTA) has selected seven projects that will receive a total of 22.5m dollars for research and development pertaining to all-electric and fuel cell buses, as well as the corresponding infrastructure.
greencarcongress.com

Charging Shanghai’s airports: Shanghai’s airports Honggiao and Pudong will be fitted with a total of 1,500 charging points; the first 100 will be erected before the end of the year. Moreover, the airports want to invests in hundreds of new electric and hybrid vehicles like shuttle buses and set up an EV hiring service at Shanghai-Pudong.
shanghaidaily.com

Electrification to share: Carsharing operator Communauto says it will add a total of 600 all-electric and hybrid vehicles to its fleets in Québec, Ottawa, Halifax and Montreal. The first 275 cars are said to hit the road in Montreal by the end of the week.
journaldemontreal.com (in French)

Electrification to hire: The above mentioned carsharing scheme will join Taxi Diamond’s 110 hybrid cabs on the streets of Montreal. The taxi company says that it wants to replace most of its 1,100 vehicles with electric and hybrid cars by 2020.
cbc.ca, newswire.ca

E-Wald joins Hubject consortium: The Bavarian charging network is the 200th partner to join the international consortium. It adds 600 new chargers to the intercharge network.
hubject.com

Pay by smartphone: Mobile payment service provider Wirecard and Austrian IT start-up Enio teamed up to enable cash-free payments via an app at EV charging stations. The option is said to be rolled out across all EU countries where Enio is active before the end of summer:
prnewswire.co.uk

Car2Go black: Daimler announced to integrate its B-class into its car sharing, which only offers Smarts so far. In a first step 200 Mercedes B will be deployed to Berlin and Hamburg, Germany, where they can be rented and unlocked via smartphone. Other than with the Smart, the black cars can only be picked up and returned at designated parking lots but can be driven one-way between the two cities. Since Berlin and Hamburg already have some H2 stations, why not make the B-Class f-cell part of the scheme?!
handelsblatt.com (In German)

Focus EV promotion: With Ford selling only a couple of hundreds electric cars every month, the carmaker has now announced a new finance package for buyers of the Focus EV in the U.S. Together with a additional cash sum of 6,000 dollars refunded by participating dealers, the Focus finally comes in the pricing range of its competitor Nissan Leaf.
transportevolved.com

Rural electric transport: In its current project, German E-Wald is showing that electric cars can also work in rural areas. In Deggendorf, this has proven rather successful so far: 95 out of 151 electric cars are let longterm while another 30 can be shared on demand. More towns in the Bavarian Forest are scheduled to join the project.
pnp.de (In German), e-wald.eu (In German)

klima:aktiv mobil: The Austrian climate initiative has already helped to save 570,000 tons of carbon with 4,900 mobility projects which have been funded with 66.6 million euros so far. In the county Tirol alone, 510 green jobs were created and 42.6 million euros invested by private companies and initiatives with the government only helping to start it off with 5 million euros.
oekonews.at (In German), klimaaktiv.at