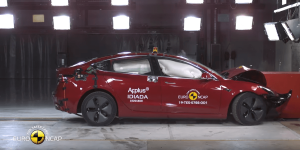 The European New Car Assessment Programme (Euro NCAP) has awarded the Tesla Model 3 a full five-star rating in its latest round of crash tests – repeating the good performance measured with NHTSA tests in the USA.

Video tip 1: Yesterday we told you that Euro NCAP drove the Model S into a wall. Today, you can see for yourself why the all-electric sedan has received the maximum-possible 5-star safety rating from the European New Car Assessment Program.
youtube.com

Video tip 2: Jonathon Buckley from Translogic takes Harley Davidson’s LiveWire concept for a spin and loves it. He says he would be surprised if the concept did not make it into production soon, also because of all the effort and market research the manufacturer has put into it.
autoblog.com

Event for the upcoming week: 12. Michelin Challenge Bibendum (Nov 11-14; Chengdu, China)
You can find a complete list of upcoming industry events at electrive.com/calendar

Tesla Q3 earnings: Tesla set a quarterly record for its Model S, delivering 7,785 EVs during the July-September period. Revenue nearly doubled to 852 million dollars from 431 million a year earlier, while net loss widened to 74.7 million dollars. Tesla lowered its 2014 production target from 35,000 to 33,000 vehicles and pushed back the delivery date for the Model X to the third quarter of 2015.
wsj.com, forbes.com

e-NV200 launches in Japan: Nissan has begun shipping its Barcelona-built electric van to its home market. There it is available starting from 3.9 million Yen (about 34,000 USD) before government subsidies. According to the carmaker, 69 companies have already placed their order.
japan.ahk.de (in German), insideevs.com, theolivepress.es

Cheap EV in China: Chery launches its electric eQ on the Chinese market, that is said to be able to go 200 kilometers on one charge. Due to government subsidies, the 150.000 yuan (around 24,500 USD) vehicle is available for just 59.800 yuan (around 9,800 USD).
carnewschina.com

Piaggio-Pedelec: The Italian manufacturer’s new e-bike, shown at the EICMA in Milan, features a 250-350 W electric power unit developed by the Piaggio Group, a 400 Wh battery, bluetooth connection and a USB port. The e-bike will become available next summer.
ebike.piaggio.com

Tesla aces crash test: Euro NCAP drove the Models S straight into the wall and awarded it a maximum-possible 5-star safety rating. The sedan scored 82 percent for the protection of drivers and front-seat passengers as well as 77 and 66 percent for child and pedestrian safety, respectively.
transportevolved.com, teslamotors.com

Eva follows Ego: In Milan, Energica unveils its second electric motorbike called Eva. It will feature the same electric drivetrain as its predecessor Ego (100 kW). It will also have the same battery that can hold up to 11.7 kWh of energy, but more range than the Ego (150 kilometers).
autoevolution.com, technologicvehicles.com

Final battle for Tesla Gigafactory: The Californian carmaker now wants three instead of just two U.S. states to compete as location for its Gigafactory. The first finalist will be announced this month and a ‘winner’ will be named by the end of the year. The move is good news for California, which Tesla CEO had said, would not be among the initial two states.
forbes.com

NCAP puts quadricycles to the (crash) test: In the EV category, the Club Car Villager 2+2 LSV, Renault Twizy 80, and Tazzari ZERO had to hit wall at 50 kmh (37 mph). The Twizy performed the best, also compared to petrol-driven models. Still, Euro NCAP criticised the outcome, saying it is worrying that these vehicles do not meet the same safety levels as cars.
autoevolution.com, thegreencarwebsite.co.uk

24 laps completed: It is the first time the Nissan ZEOD RC took to the track at Le Mans. And while it was delayed by a few technical issues, drivers and engineers see it as an important part of the car’s development. The goal is to complete an entire lap at Le Mans on electrical power only.
electriccarsreport.com

Let’s talk about S-E-X: Because Ford had filed for trademarks for the letter ‘E’ and later the ‘Model E’ and threatened to sue Tesla, the electric carmaker dropped the name for its next mass-market sedan (we reported). Elon Musk has now referred to it as “Ford killing sex”, with Model S and Model X missing that certain letter.
forbes.com, transportevolved.com