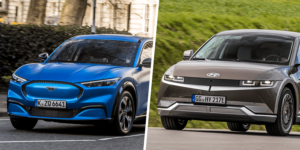 Two electric models were assessed in the latest EuroNCAP crash tests: both the Ford Mustang Mach-E and the Hyundai Ioniq 5 achieved full five stars in the overall rating.

In the individual categories (adult occupants, children, other road users and safety assistants), however, the Ford performed slightly better overall. For adult occupants, it achieved 92 per cent (Ioniq 5: 88 per cent) and for the protection of other road users, 69 per cent (Ioniq 5: 63 per cent). One of the reasons for the latter rating is that the Ford has an active bonnet, which offers pedestrians and cyclists slightly better protection in the event of an accident.

When it comes to safety assistants, however, the Hyundai comes out on top with 88 per cent; here the testers only rated the Ford at 82 per cent. When it comes to protecting children in the car, both models are on a par with 86 per cent.

In addition, the Volvo XC40 Recharge and the VW Touareg eHybrid as PHEV were crashed in the current test series. EuroNCAP does not give detailed results for the electrified vehicles, but merely states that the respective result of the combustion engine variants tested in 2018 could be confirmed – which also means five stars in both cases.