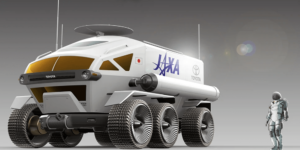 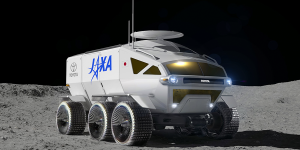 It’s just Japan on the moon

Toyota is looking to put a fuel cell-powered rover on the moon. The development is part of a recent agreement between Toyota and the Japan Aerospace Exploration Agency (JAXA) on a cooperation in international space research.

Autonomous electric Mercedes: At the CES, Daimler presented the ‘F 015 Luxury in Motion’. The limousine is extra long and high, providing enough space for four seats that can be pivoted electrically. LEDs indicate if autonomous mode is on and also signal pedestrians to go on with a laser-projected crosswalk. The system’s power is no less impressive as it offers a total range of 1,100 kilometres, including around 200 km of battery-powered driving and around 900 km on the electricity from a fuel cell.
caranddriver.com, slashgear.com, mercedes-benz.com, youtube.com (video)

High-tech e-Golf: Volkswagen used the CES to showcase inductive charging with the ‘e-Golf Intelligent Charge.’ The electric car automatically positions itself over the charge plate and lights indicate the state-of-charge on the outside. The e-Golf was also used to present VW’s ‘Trained Parking’.
greencarcongress.com, wallstreet-online.de

BMW charges wirelessly: Demonstrated with the plug-in hybrid i8, the Bavarians also presented inductive charging at the CES. The prototype takes two hours to replenish the battery of the i8. Last July, BMW had agreed to cooperate with Daimler in the field of wireless charging (we reported).
bloomberg.com, bmwblog.com

Electric plane from Japan: The Japan Aerospace Exploration Agency (JAXA) plans to launch manned test flights of its next-generation electric aircraft next month. The remodelled glider is propelled by a 60-kW electric motor powered by Li-Ion batteries that last for about 15 minutes in the air.
the-japan-news.com

Most clicked link on Tuesday was the unexpected early reveal of the next-generation Chevy Volt at the Consumer Electronics Show in Las Vegas.
transportevolved.com