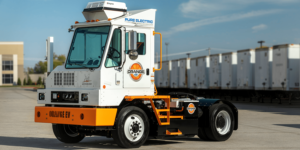 US American electric truck manufacturer Orange EV has announced it will establish its new corporate headquarters and manufacturing operations in the Turner Logistics Center, an industrial park under construction in Kansas City.

Because Missouri’s car dealer association prohibited Tesla from participating in the Kansas City Auto Show, Tesla owners unceremoniously organized an exhibition of private Tesla vehicles themselves – in the parking lot of the exhibition grounds.

Renault announces Zoe-sharing: The French manufacturer will implement a carsharing scheme called Renault Mobility in France, which it will present at the Salon d’Automobile in Paris in October. On top of cars with combustion engines, private and business customers will also be able to rent the Renault Zoe.
renault.com

Ford cooperates with MIT: The two have announced a research project using a fleet of electric shuttles. LIDAR sensors and cameras will measure pedestrian traffic on campuses and public roads to determine areas where there is demand for electric shuttle buses.
greencarcongress.com

New electric busses across the pond: Proterra announced that eight existing and new customers have received grants to buy a total of 35 electric buses. That brings the manufactures total orders to 287 electric buses from 38 U.S. cities.
greencarcongress.com

Speeding drivers in Missouri, USA will soon not be captured on speed camera but be shot at with unpleasant sounds from a sound cannon. These ‘acoustical weapons,’ however, are designed to disturb and disorient people – not exactly what you want on a highway!
gizmodo.com

+ + +
We hope you stay safe and wish you a jolly Good Friday and happy Easter before we come back with more electrifying news next Tuesday, April 22nd!
+ + +