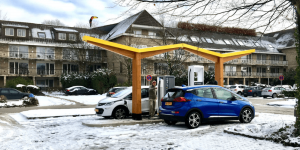 German charging infrastructure: Half a million euros will be spend by North Rhine-Westphalia, Germany, for the installation of up to 200 EV charging stations within its county borders. The initiative is part of a joint investment programme of Germany’s federal and state governments, which will kick off next year.
land.nrw (in German)

Fresh fleet: The Austrian city of Linz will see 20 electric catenary buses successively replacing existing ones by 2017. The Van Hool buses cost public transport provider Linz AG 20m euros. They are 24 m long, have room for 180 passengers and a range of up to 10 km.
nachrichten.at (in German)

Fleet replacement: British Chichester District Council will replace seven petrol vehicles in its fleet with electric ones when their leases run out. The will be used by the parking services department and external contractors. The council hopes to save 1,000 GBP per year per vehicle.
bbc.co.uk

Super Chargers for China: Tesla announced the start of negotiations and preparations to install a network of its Super Chargers across the Asian nation. The first corridor to open up for all-electric rides is planned to be Beijing-Shanghai. When the first chargers will be ready for use is not said.
chinacartimes.com, teslamotors.com

Canada electrified: VIA Motors has signed an 80 million dollar purchase agreement with Sun Country Highway. A deposit of 8m dollars for the first 100 VIA electric-vans has already been placed. The vehicles will go to Best Western Hotels in Canada, which have been supplied with 1,000 public chargers by the privately funded electrification project Sun Country Highway.
marketwired.com

“Klimaschutz made in NRW”: This is the Denglish slogan of a new initiative in the German city of Essen. “NRW” is short for Northrhine-Westphalia while “Klimaschutz” means climate protection and is in this case a mini-fleet of four electric cars. For the next two years, employees of the State Office for environment and consumer protection will drive around in three Renault Zoé and one Fluence to test if EVs are a viable option for their daily routines. If so, more will be purchased.
emobilserver.de (In German), youtube.com (Video in German)