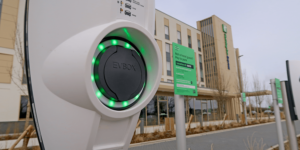 E-carsharing in Beijing: Leshi Internet Information & Technology affiliate, LeShare, has launched an EV carsharing service in Beijing. They are servicing 60 areas in the city with 200 vehicles, all of which are from Chinese brands, including BYD, Chery, JAC, Beijing Auto, and Geely. The company is planning to expand to six more cities and 3,000 vehicles in total by the end of 2016.
asia.nikkei.com

Tesla valet service launched: Tesla’s park and charge valet app has finished its test run (we reported) and is now officially available for owners in NYC and San Francisco. App developer Luxe is offering subscriptions to their Tesla services for a monthly fee.
electrek.co

Van Hool e-trambus: Manufacturer Van Hool will showcase their first fully electric trambus, Exqui.City, at the Transports Public 2016 trade fair in Paris next month. The 120 km range trambus is 18.61 m long and can carry up to 107 passengers. Fast-charging can take as little as ten minutes via a pantograph. Hamburg, Germany, has already ordered two units.
masstransit.network

Solar carports in South Africa: BMW South Africa has set to begin rolling out solar carport charging stations for electric and plug-in vehicles in July. The carports, produced by Sunworks, average 3.6 kW of solar power and are hooked up to the BMW i Wallbox. Carports can be ordered as home or office chargers.
techfinancials.co.za

EV funding in Dundee: The city council of Dundee, Scotland, has approved over 1.8m pounds for improving local EV infrastructure, starting with one charging point in the city centre and two in outlying areas. Part of the funds will also go toward charging points for commuters in the surrounding council areas.
thecourier.co.uk