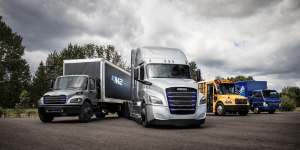 Bozen and Val d’Aosta unleash EVs: Italian province of Bozen/Bolzano launched the #ViaggiareSmart plan, that includes a 4,000 euro rebate for purchases of BEVs, and 2,000 euros for plug-in vehicles. Furthermore, the local government will add 10 more charging stations in its relatively small district, following the lead of Val d’Aosta, who will add 35 more charging points, making it the most dense area in Italy in terms of installed charging stations.
lastampa.it (in Italian) via ev.today

Built-in EV charging: Neighbourhood regeneration firm Blueprint is planning to install communal electric car charging points throughout its 100m pound Trent Basin development, after 75% of buyers have shown interest in the eco-friendly side of the site. It is part of the Go Ultra Low Nottingham programme.
nottinghampost.com

California to introduce EV fees: The state that was a plug-in’s paradise for so long is working on a change of policy in order to make up for “lost” revenue that otherwise used to come from gasoline taxes. Hence, a one-time registration fee of 100 dollars will apply for plug-in vehicles starting in the 2020 model year. On top there will be annual fees of 25 dollars for PEVs and 175 for EVs worth more than 60,000 dollars – you may call that a Tesla tax. Fair or not, California will boost its gas tax 43% at the same time, so it is by far not the end of green politics in the Golden State.
autoblog.com

UberE programme in Portland: The ride sharing service has launched a new scheme in Portland together with the Drive Oregon NGO to help drivers switch to electric vehicles. Uber will send EV Ambassadors and has teamed up with Xchange Leasing as well as local EV manufacturer Arcimoto. Another buying option is for electric bicycles for those that deliver food with UberEATS.
electrek.co, techcrunch.com

DriveNow and car2go to join forces? According to German Manager Magazin, BMW and Daimler want to merge their carsharing businesses. Others like BMW’s charging infrastructure subsidy ChargeNow or Daimler’s MyTaxi could later join in. DriveNow stakeholder Sixxt would, however, leave the group. A reason for the merger is i.e. growing competition from Uber, etc.
manager-magazin.de (in German), reuters.com (Sixxt)

First 350 kW charger being built: EVgo kicked off the installation of the U.S.’s first 350 kW charging station. It has four ultra-fast connectors, as well as CCS and CHAdeMO outlets. The station will be commissioned in June. The road for the energy hungry Porsche Mission E has been paved.
insideevs.com

Portland pushes electrification: The city in Oregon and surrounding Multnomah County have passes and emobility strategy that will see the replacement of at least 10,000 diesel and petrol-cars with electric ones by 2020. Portland itself will get 60 EVs. Moreover, the number of chargers in the county will be doubled.
bizjournals.com, portlandoregon.gov

Charging North Carolina: Duke Energy will install 200 new EV chargers across North Carolina. A list of exact locations has now been made public. The utility earmarked 1.4m dollars for the undertaking. The investment is part of a lawsuit settlement with the state, which accused the utility of illicit smokestack pollution (we reported).
prnewswire.com

Smart streetlight: 20 intelligent streetlights offering WiFi have been installed in Beijing. 18 of which also include a place for EVs to plug in. The city plans to install another 100 units.
cri.cn

EV boost for Malaysia: GreenTech Malaysia is targeting to roll out no less than 25,000 charging stations across the country by 2020 to encourage uptake of EVs. The country aims to bring 100,000 electric cars, 2,000 electric buses and 100,000 electric scooters on the streets by the end of the decade.
eco-business.com, paultan.org

Fly & charge: Portland International Airport has installed a total of 42 Level-1 charging stations at its car park, said to be the largest such installation in the United States. The “slow” chargers are available for free access and were chosen due to of their low energy consumption and because they are believed to be the ideal solution for the long stopovers of vehicles at the airport.
evfleetworld.co.uk, greentechlead.com

Upgrading filling stations: In India, existing gas stations could be supplemented by solar charging stations, as the government looks to promote the use of electric cars. The national roll out of the scheme may start from next financial year onwards depending on the proliferation of EVs in the country.
mydigitalfc.com

Charging etiquette: Tesla sent letters to customers that are aggressively using Superchargers, saying that these weren’t really meant to be used for local driving. According to Tesla, the Supercharger promise is “free long-distance travel forever” rather than “free forever” (the phrase Tesla has used up to now).
greencarreports.com

London pushes electrification: Mayor Boris Johnson has unveiled the “ULEV delivery plan” including a number of measures to increase EV sales. For example: 150 fast-chargers will be installed by 2018 and 300 electric buses will hit the streets by 2020. The car club industry commits to at least 50 percent plug-ins by 2025 and even the fire department will replace 57 fleet vehicles with hybrids and range extended cars. Moreover, a £65m programme will encourage taxi drivers to switch to electric cars.
london.gov.uk, independent.co.uk, tfl.gov.uk (ULEV delivery plan as pdf)

Electric buses for Brazil: BYD will deliver ten of its K9 12-meter electric buses to Campinas, Brazil. The buses will be used in public transport, making Campinas the first Brazilian city to have zero-emission buses in service.
automotiveworld.com

CCS update: According to CCS Charge Map, Europe now counts more than 1,200 CCS charging stations. In early June the number was still at 1,000 (we reported), a 20 percent increase in six weeks.
insideevs.com, ccs-map.eu

Dundee carsharing extends EV fleet: The scheme, run by Co-wheels, has added six Renault Zoe and one Nissan e-NV200 van to its fleet. The latter is expected to be used especially by local businesses.
thecourier.co.uk

Green taxi service: EcoCab is a new taxi service in Portland, Oregon. Its fleet consists of ten Nissan Leaf and three Tesla Model S. EcoCab will test the waters for the coming four months, knowing that in the times of Uber, starting a taxi company is not an easy task.
pamplinmedia.com, oregonlive.com

With 265 EV charging stations, Portland has the highest number of chargers per person in the U.S. It is also ranked as the third-leading metro area in the country for clean technology, according to the 2015 U.S. Clean Tech Leadership Index.
suntimes.com

Study tip: According to a study by Northeast Group, there are currently 25 utilities in 14 U.S. states that offer electricity tariffs tailored towards EV owners. Taking advantage of the off-peak rates, fuel costs compare to only 0.75 dollars per “gallon.”
greencarreports.com, chargedevs.com, northeast-group.com (study, PDF)

Video tip: See how Portland prepares for worst-case scenarios like earthquakes. When most means of transport will be useless, an armada of cargo bikes might come to the rescue.
oregonlive.com via green.autoblog.com 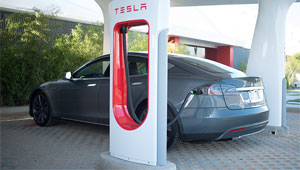 Tesla and BMW to join forces? Apparently, both carmakers have met last week to discuss a possible collaboration “to strengthen the development of electro-mobility on an international level,” a BMW spokesperson confirmed. According to Elon Musk, there had also been talks on how to make better use of Tesla’s Supercharger network.
electric-vehiclenews.com, hybridcars.com, teslamag.de

Portland testing e-NV200: In a six-week trial, Nissan together with Portland General Electric (PGE) will test the viability of an electric commercial vehicle in the States. The utility provider has therefore introduced an e-NV200 into its fleet in Portland.
automotive-business-review.com, green.autoblog.com

Audi takes top spot at hybrid battle: The German carmaker won the legendary 24-hour race at Le Mans for the fourth time in a row. At the end, both R18 e-tron quattros battled for the lead, after Toyota’s leading vehicle had to cut its race short. Newcomer Porsche saw one of its cars cross the finish line.
greencarcongress.com, puregreencars.com

Hybridised BMW M: Friedrich Nitschke, Head of BMW’s M division, can imagine to introduce the M models with carbon and hybrid technology in the near future, German Auto, Motor und Sport reports. However, he does not see a pure M hybrid anytime soon as the additional weight of a 300-kilo battery does not fit into the series’ aim to reduce weight.
focus.de (in German)

Ford has to lower MPG ratings: In accordance with the U.S. Environmental Protection Agency (EPA), the American carmaker is to correct the fuel economy ratings of six models. Among them are the hybrid C-Max and Fusion which were found to be up to 15% less efficient than previously announced. For the C-Max it is the second downgrade already and Ford promised to reimburse the 200,000 owners.
greencarcongress.com, hybridcars.com, electriccarsreport.com

e-NV200 Review: Following the start of the trial of Nissan’s electric van in Portland, Bengt Halvorson was allowed to take a few turns. He was surprised of how much it actually felt like the 2014 Leaf with which the e-NV200 shares its drivetrain. One difference Halvorson found is the feasible two-stage accelerator linkage designed to prevent van drivers from pushing it too hard if not yet used to the “EV’s instantaneous torque.”
greencarreports.com