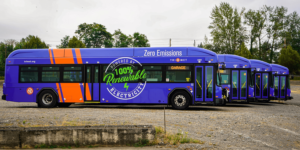 In Portland, Oregon, public transportation provider TriMet will purchase 24 battery-electric buses from California-based bus manufacturer Gillig. This is the first time TriMet has bought e-buses, yet the operator has fairly ambitious targets.

TriMet wants to transition to a zero-emissions bus fleet by 2040 and has called the deal with Gillig “a critical milestone”. The buses in this first bulk purchase of all-electric buses will be long-range buses, able to travel between 150 and 200 miles on a single charge.

Gillig says deliveries will start in autumn 2023 with costs estimated at 26.7 million dollars.

“This represents our largest investment in electric bus technology to date,” TriMet adds.

TriMet has been testing electric buses since 2019 with tests including short-range electric buses from New Flyer, the Gillig buses and G and four diesel-to-electric converted buses.

“Transitioning away from diesel completely will take time as electric, and other zero-emissions sources continue evolving, but now is the time to invest in this emerging technology,” said TriMet General Manager Sam Desue Jr.

The companies have not disclosed technical details for the Gillig buses on order. It is, however, known that Gillig uses batteries from Germany’s Akasol. Configurations reportedly include 490 kWh, 588 kWh or 686 kWh capacity from 2023, depending on customer requirements. Gillig claims the 686 kWh variant has the largest storage capacity on a North American transit bus. Since TriMet calls the bus a long-range model, we expect they opted for it.

The transit bus is based on Gillig’s low-floor platform and is up to 40 feet long – the equivalent of 12.2 metres. Gillig says that integration into existing fleets should be seamless because the platform has already been in use for years. The 40-foot model seats 75 passengers, 38 of whom are seated. A shorter 35-foot version (10.67 metres) accommodates 62 passengers, 31 of whom are seated. Cummins supplies the electric drives.

Gillig’s e-bus production is set to kick off in the US next year.

Yet more electric buses for Milan this year

BMW and Mercedes to sell Share Now to Stellantis