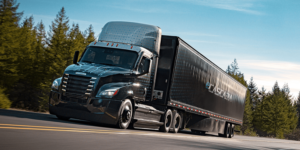 Daimler Trucks North America (DTNA) has now presented the production version of its battery-electric truck model Freightliner eCascadia. Production is set to start later this year at Freightliner’s factory in Portland, Oregon. Freightliner has received around 700 orders for the electric truck so far.

Daimler had already put the first prototypes of the eCascadia into customer hands in 2018, and the first pre-production models have been in fleet testing since August 2019. Since then, the 40 vehicles have covered over one million miles or 1.6 million kilometres.

This experience has been incorporated into the production model of the Class 8 semitrailer tractor, which Daimler Trucks North America has now unveiled at the Advanced Clean Transportation Expo in California. Visually, the vehicle largely corresponds to the combustion engine model or the pre-production examples. One difference: as the cooling requirement is significantly lower, the designers have installed a closed radiator grille at the front.

On the other hand, the drive and range options have now been confirmed. Customers can choose between three battery options: 194 kWh, 291 kWh and 438 kWh. The latter version is said to have a range of up to 230 miles or 370 kilometres. At a fast-charging station, the smallest battery can be charged to 80 per cent in 90 minutes, while Freightliner quotes a charging time of 120 minutes for the two larger options. A full charge to 100 per cent takes up to six hours for the 438 kWh battery – so overnight the battery can be charged to 100 per cent.

The eCascadia is driven by an electric axle drive developed in the USA by the Daimler subsidiary Detroit ePowertrain. This E-axle is available with a single or dual motor. The variant with one motor has a maximum output of 145 kW, the one with a double motor up to 295 kW. This is the maximum power of the axles, not of the eCascadia: here Freightliner gives the range as 238 to 350 kW. The vehicle’s performance depends not only on the drive units, but also on the interaction with the battery.

With a maximum permissible weight of 82,000 lbs or 37.2 tonnes and a maximum range of 370 kilometres, the eCascadia is not intended as a long-haul truck, but for last-mile logistics, local and regional distribution traffic and the transfer of freight between two warehouses. Freightliner does not specify the payload in the announcement.

According to Freightliner, for “successful freight operations” with an e-truck, not only the drive is important, but also the connectivity. A portal called “Detroit Connect eServices” was therefore developed for the eCascadia, which among other things contains a Charger Management System (CMS). The CMS is intended to provide companies with information on depot utilisation, collect the necessary data for compliance with funding requirements and manage charging. Among other things, the system can plan staggered charging of several vehicles or optimise charging with regard to costs or network load.

A range prediction tool is intended to help with the switch to electric trucks. This automatically calculates the range and displays it over the course of a proposed journey. According to Daimler Trucks, the tool analyses several data inputs, including vehicle parameters, load, weather, traffic and gradients/descents, in order to provide the most accurate information possible. “The eRange Prediction enables testing of ‘what-if’ scenarios and performs analysis,” the release says.

A revised pre-production series is expected to go into production this year, with a maximum range of 230 miles. These vehicles are then to replace examples of the first pre-series, which only got up to 150 miles. Next year, series production of the eCascadia is to start. DTNA plans to introduce the series version of the eM2, a Class 6 medium-duty electric truck, before the end of 2022.

And the development of eCascadia is not finished with the start of series production either: Meanwhile, Daimler Trucks North America is working with Cummins to equip the Freightliner Cascadia combustion engine truck with a fuel cell powertrain for use in North America. Following successful validation, the companies intend to make the first units available to selected customers in 2024. However, performance data and range targets are not yet mentioned in the announcement.