XALT Energy and the ReCell Center, the battery recycling centre of the US Department of Energy’s Vehicle Technologies Office, are launching a joint collaboration to develop a sustainable recycling process for lithium-ion batteries. 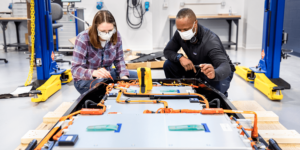 US DoE to invest in emissions reduction

The U.S. Department of Energy (DOE) announced $60 million for 24 research and development projects aimed at reducing CO2 emissions from passenger cars and light- and heavy-duty trucks. A total of $28.1 million will be awarded to accelerate innovation in EV batteries and electric drive systems.

The US American Department of Energy announced the awarding of $52.5 million to fund 31 projects to advance clean hydrogen technologies and support the recently announced ‘Hydrogen Energy Earthshot’ initiative to reduce costs and accelerate breakthroughs in the hydrogen sector.

Take part: The U.S. Department of Energy is offering 5,000 dollars for the best logo design for the White House’s initiative “EV Everywhere.” The aim is pretty self-explanatory, so it’s time to head to the drawing boards.
washingtonpost.com

Reading tip: Happy birthday solar car! The ‘Sunmobile,’ said to have been the world’s first solar-powered car, was unveiled 60 years ago yesterday. Unfortunately, only a 15 inch model of the car was ever build – definitely too small for a test spin.
energymatters.com.au

Toyota gears up for Le Mans: The Japanese are preparing for victory in this year´s WEC racing series season. Again, it will be the TS040 Hybrid that will compete and only a few changes are expected to be made to the racer. Toyota also lined up its drivers, all of them are WEC race winners.
motorauthority.com

US budget 2016: President Barack Obama requests 29.9 billion dollars for the U.S. Department of Energy in 2016, an increase of 9 percent compared to this year. The “sustainable transportation” sector is to receive 793 million dollars, i.e. supporting the goal to reduce the cost and increase the durability of transportation fuel cell systems.
greencarcongress.com, energy.gov

Ready to order: UQM Technologies announced that its PowerPhase HD 250 electric propulsion system has now achieved China certification. The system is designed for bus and commercial vehicle applications. The certification enables UQM to supply the drive throughout China.
businesswire.com

Most clicked link on Tuesday was the BMW i8 review by Hannah Elliott.
bloomberg.com

Video tip: GM has released another video, teasing the next generation Chevrolet Volt, making sure it is more than capable of driving on snow and ice. The 2016 Chevy Volt will officially be revealed at the Detroit Auto Show in January.
youtube.com via greencarreports.com

Click tip: The U.S. Department of Energy has published a report about six projects, looking at charging behaviours and the impact on the grid. The goal is to determine how long existing charging infrastructure can accommodate demand growth from electric vehicles.
greencarcongress.com

Renovo Coupé revealed at Pebble Beach: Powered by a 500 hp electric motor, the sports car can go from 0 to 100 kph in just 3.4 seconds. Its body is that of a Shelby SCX9000 Daytona. It has a top speed of 193 kph and a 100-mile range. The EV will go into limited production in the U.S. next year, with initial sales targeted for California.
green.autoblog.com, electricautosport.com , vimeo.com (Video)

U.S. sponsors fuel-efficiency research: The U.S. Department of Energy will award a total of 55 million dollars to 31 research projects of plug-in and fuel-efficient technologies. The largest single award (10m dollars) goes to further developing the Gasoline Direct-Injection Compression Ignition (GDCI) technology from Delphi. But nine projects concern the use of Li-ion batteries.
greencarcongress.com

After Volt comes Bolt? GM has filled a trademark application for the name, though what will become of it is still a unknown. Hybrid Cars says it has seen reports that the Bolt would be a cheaper version of the Chevy Volt, featuring a smaller battery pack. If a Chevy Bolt will ever roll of production line remains to be seen.
hybridcars.com, autoblog.com

Tesla upgrades warranty: Just like the EV’s battery pack, the drivetrain of the Tesla Model S is now covered by an eight-year ‘infinite mileage’ warranty. Moreover, it applies not only to new models, but retroactively to all Model S. How customers who already paid for an extended warranty will benefit from the upgrade is still in the works.
greencarcongress.com, transportevolved.com