The Dutch e-bike manufacturer VanMoof has raised another 34 million euros from investors. The Series B funding comes only a few months after a 12.5 million euro investment in May and is meant to support VanMoof’s global expansion. 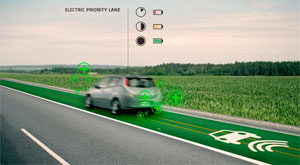 Smart Highway: In the Netherlands, the first stretch of the Smart Highway project has been unveiled. On 500 metres, drivers are now guided by glow-in-the-dark lines, which store sunlight during the day. Inductive charging while driving will also be implemented in the future.
designtoimprovelife.dk, smarthighway.net

21 million for ultracaps: Ioxus has received 21 million dollars from investors including IFC, a member of the World Bank, for their ultracapacitor business. The company plans to spend the money on improving service, sales and production in China.
chargedevs.com

Built-your-own EV: Japanese company Neues is looking at licensing its chassis for small EVs, which could be bodied however customers like. Examples of the kit-car inspired electric cars are currently being shown at the Taipei EV event in Taiwan; Neues is also looking for UK distributors.
thegreencarwebsite.co.uk

Integration is key: Vanmoof stays true to its principle also with their electric bike. The ‘Electrified’ is powered by a battery that sits within the frame. Furthermore, the display, embedded in the head tube, features GPS to locate the pedelec anytime. Orders for the 2,248 euro bike (3,100 dollars) are now being taken.
technologicvehicles.com (with video)