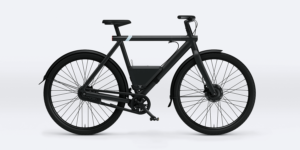 The Dutch e-bike manufacturer VanMoof has received another 128 million US dollars from investors – the equivalent of around 108.5 million euros. According to the company, this is “the largest Series C investment ever made for a European e-bike brand”.

Together with the two previous funding rounds last year, VanMoof now has a funding pot totalling 182 million dollars (around 154 million euros). The current funding round was led by Hillhouse Investment, an Asia-based private equity firm. Another new investor is Gillian Tans, the former CEO of Booking.com. Also on board were existing investors Norwest Venture Partners, Felix Capital, Balderton Capital and TriplePoint Capital.

The Dutch company plans to use the new funds to increase production capacity, continue the development of new technologies and improve bike specifications and reliability. “We are reinventing, designing and re-engineering every component of the bicycle. This has never been done before and will change the way a bicycle is made, sold and serviced forever,” lets Taco Carlier, co-founder of VanMoof announce. This will be instrumental in getting 10 million people on our bikes in the next five years.”

VanMoof was founded in 2009 by brothers Taco and Ties Carlier, and the company currently offers two e-bike models, the S3 and X3. Both feature, among other things, automatic electronic shifting, integrated anti-theft technology and the “Apple Find My Network” location function. Prices start at 2,198 euros.

The high-quality bikes of the Amsterdam start-up were already selling well, but the Corona-related lockdowns have additionally caused a boom in orders. Sales figures are said to have more than tripled in 2020. This spring, the company put the “global rider community” at “150,000 riders – and growing.” At that time, VanMoof had presences in Amsterdam, Berlin, London, New York, Paris, San Francisco, Seattle and Tokyo. In the meantime, retail locations have been established in 50 cities, the company says. VanMoof has identified the USA as its biggest growth market.

In April, VanMoof announced several new products. This year, for example, the Dutch e-bike manufacturer launched a detachable powerbank that is supposed to give riders up to 100 kilometres of additional range on VanMoof bikes and can be easily charged indoors. In addition, the bikes now have a more visible matrix display, redesigned mudguard flaps and pedals, and better internal wiring. In addition, VanMoof’s bike boxes are now more compact and contain 70% less plastic.

“Since the launch of the S3 & X3 we have listened carefully. Rider feedback is key to our new technology,” said Taco Carlier. “Our ability to incorporate it quickly is what makes VanMoof unique.” The Carlier brothers attribute this speed to their vertical supply chain, which combines everything from design to component engineering to distribution. This, they say, allows them to constantly update their product.

In view of the expansion plans, the Dutch company’s capital requirements are currently high: even before the current financing round, VanMoof raised 34 million euros from investors in September 2020 and 12.5 million euros in May 2020.