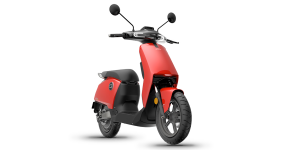 An electric scooter made by Vmoto and Ducati

The Sino-Australian bike manufacturer Vmoto has signed a worldwide license agreement with the Italian motorcycle brand Ducati. The agreement provides for the distribution of CUx electric scooters under the Ducati brand through Vmoto’s dealer network. 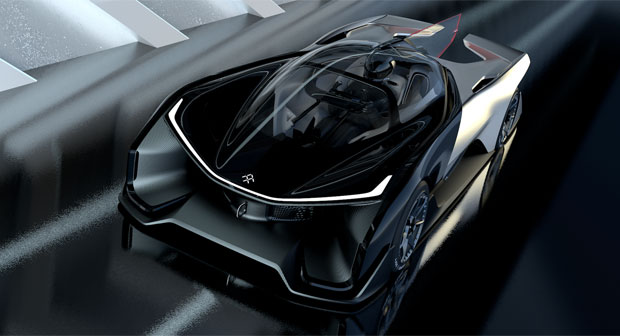 Faraday Future premiers concept car: FF took the wraps off its electric sportscar FFZERO1 ahead of the CES in Las Vegas. The car only has space for the driver and boasts 1,000 hp. It is basically an all-electric Batmobil, which will never make it to serial production in its current form. A peak under the hood is still worthwhile. The so-called Virable Platform Architecture (VPA) is said to allow FF to quickly build a number of different EVs. According to German newspaper Die Welt, the start-up will make shore in Europe as well, founding the FF Europe GmbH in Dusseldorf, Germany.
theverge.com (with videos), welt.de (in German)

Tesla reaches full year target: Tesla Motors delivered a total of 50,580 vehicles this past year, reaching its recently adjusted sales target of 50,000 units. A total of 17,192 Model S were sold in the fourth quarter alone, and a mere 208 Model X. The carmaker says it since increased production to 238 Model X per week.
teslamotors.com, greencarcongress.com, bloomberg.com

Chevy Volt upgrade: Chevy already plans minor updates to its recently introduced second generation Volt. The new version will be 100 dollars more expensive than the 2016 model and will be available across the United States. The current version is only available in some states.
carscoops.com, autoblog.com, carsdirect.com

Toyota still shuns plug: Chinese joint venture FAW Toyota announced that more than half of its 17 vehicles planned for the coming five years will be offered as a hybrid variant. However, none as a plug-in. Hybrids are said to account for 30 percent of FAW Toyota’s sales by 2020.
chinadaily.com

No rebates for the rich: From March, California will see social rebates. Those earning more than 500,000 dollars (250,000 for singles) will be excluded from the subsidy for EVs and PHEVs. Households making less than 60,270 dollars per year will get 1,500 USD more from the state.
autoblog.com, carsdirect.com, cleanvehiclerebate.org

Model X production rolling: Tesla has stopped guided tours through its Fremont facility – a strong indicator that serial production of the new Model X is about to start. First deliveries are set for September and already 29,465 pre-orders have been placed. Apparently, Tesla gets up to 40 new orders a day.
cleantechnica.com (production), bidnessetc.com, teslamotorsclub.com (pre-orders)

Electric BMW SUV? BMW is readying its Tesla-Fighter, as rumours about an X7-based electric SUV have been re-enforced by German WirtschaftsWoche. The BMW board is currently evaluating potential designs, although it is not clear what these look like.
wiwo.de (in German), cleantechnica.com

The London Taxi Company broke ground on its new facility in Coventry. The 250-million pound site is to produce the new “green” Black cab and is funded by Geely (we reported). The factory is full of energy-saving features and will provide work for up to 1,500 people.
coventrytelegraph.net

Formula E approved: FIA has approved eight powertrain manufacturers that will provide the technology for the ten teams during the second season of the electric championship. It is the first time that Formula E will be an open competition with different drivetrains being introduced.
electricautosport.com

European expansion: Australian Vmoto is eyeing Europe, appointing a distributor for its electric scooters in Great Britain and Ireland. More talks are to be held with dealers in Denmark and Switzerland. Also, the company is negotiating with an unnamed European supermarket group.
businessinsider.com.au

NSX successor to debut in Detroit: Honda is finally ready to present a production version of the new NSX under the Acura label at the NAIAS. First teaser images show the 2016 NSX Hybrid which will be powered by a mid-mounted V6 twin-turbo engine working together with three electric motors.
worldcarfans.com, carmagazine.co.uk

All-electric Audi A3? Apparently, the German carmaker is pondering the idea of an all-electric Audi A3, Manager Magazine reports. It could use a revamped drivetrain from VW’s e-Golf and hit the market by spring 2016. We’d be up for it!
manager-magazin.de (in German, part 5)

U-turn at BMW: Despite a press release by BMW USA stating otherwise (we reported), the German carmaker will not present a hydrogen concept at the NAIAS in Detroit. The concept was initially expected to showcase technology more advanced and capable than what’s found in the Toyota Mirai.
bmwblog.com

New Chinese JV coming up: Electric scooter manufacturer Vmoto says it plans to form a new joint venture with yet unnamed partners in China to produce electric three- and four-wheelers. Between 20,000 and 50,000 units could be build in the first year already.
yahoo.com, lse.co.uk

Lowering expectations: Morgan Stanley analyst Adam Jonas is reducing its sales forecast for Tesla due to low oil prices. He now predicts that the EV maker will sell less than 300,000 units until 2020, instead of half a million. Furthermore, Jonas believes the Model 3 could cost near 60,000 dollars, while Tesla is aiming at a price of 35,000 dollars.
money.cnn.com, businessinsider.com