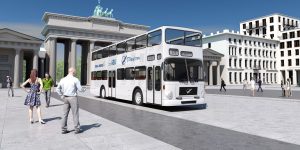 The companies Tassima, Ziehl-Abegg and IAV are working together to electrify the tourist double-decker buses in Berlin. The diesel buses were once used for public transit, and will now be electrified to serve tourists.

Gigafactory update: Tesla’s primary partner for its Gigafactory, Panasonic has created a new company called Panasonic Energy Corp. of North America. It will be based at the soon to be built Tesla Gigafactory in Sparks, Nevada and entirely focus on Tesla battery production.
panasonic.co.jp

Sudden loss of power: Consumer Reports said it has discovered an acceleration problem with the BMW i3 REx. As one of its drivers attempted to pass a vehicle after almost depleting the main battery, the i3 with range extender suddenly began to lose power without warning. BMW is reportedly working on a fix for the issue, that will be available next spring.
consumerreports.org

New ZAwheel revealed: German electric motor manufacturer Ziehl-Abegg has shown the second generation of its in-wheel hub motor ZAwheel. The gearless electric drive for city buses now offers more power up from 99 to 113 kW per wheel, while torque has increased from 2,100 to 2,700 Nm.
busandcoach.com