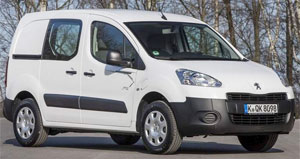 Peugeot electric van for Germany: Peugeot now offers its ‘Partner’ electric van in Germany. It costs 24,752 euros without battery which can be bought for 6,037 euros or leased on a monthly payment. In UK, the Partner EV has been available since last year.
automobilwoche.de (in German), peugeot.co.uk (UK)

Volvo electrifies bus fleet: Andreas Heuke, product manager for alternative propulsion systems at Volvo Buses, explained in an interview the ‘Green-Efficiency-Strategy’ of the Swedish manufacturer. Volvo buses are now only available as hybrids with plug-in hybrids and finally fully electric vehicles to follow. More specifically, Heuke announced an electric version of the Volvo 7900 for 2016.
eurotransport.de (in German)

Porsche plug-in SUV: Spy shots of a Cayenne plug-in hybrid have emerged on the web. It is said to use the same drivetrain as the Porsche Panamera Plug-in.
gtspirit.com, autoblog.com

McLaren P1 reviewed: Matt Davis took prototype no. 5 of McLaren’s P1 for a spin on Dunsfold Airfield, UK. Davis first finds the P1 to be a ‘perfectly fine everyday driver.’ That is before pushing the Race button, which catapults him right into a ‘new world of exotic hardcore speed and balance’ Davis did not think possible in a street car.
autoblog.com (with video)

German Twizy rival: The Colibri by Innovative Mobility Automobile (IMA) from Jena, Germany, is a one seat electric quadricycle. Other than its French counterpart, it is fully covered and measures only 2.8 x 1.1 metres. The Colibri is expected to hit the German market next year at a price from 8,900 euros with a monthly battery lease of 55 euros.
thegreencarwebsite.co.uk (with video)