Electric Twingo to be delayed: Renault has put the electrification of its revamped compact car on hold without providing a new introduction date. The company makes low demand for pure electric cars responsible for the move, as consumers are not accepting lower range and comparatively high costs.
bloomberg.com

European debut for Lexus NX: Toyota’s premium brand presented its first SUV, which it believes to become a “game changer” when it goes on sale in Europe this October. The NX 300h hybrid will be available with one or two electric motors with a total system output of 145 kW. In the UK, prices start at 29,495 pounds (about 50,000 dollars).
autocar.co.uk, puregreencars.com

Long Beach ePrix: Formula E has revealed the location of round seven of its inaugural season – Long Beach, California. At the ePrix race on April 4th, 2015, the audience will have free access to the Long Beach street circuit with its scenic start/finish line at the Marina.
electriccarsreport.com 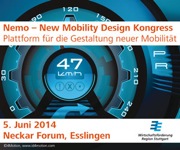 NEW MOBILITY DESIGN CONGRESS 2014: What will mobility user interfaces look and feel like in the future? How can virtual and artificial intelligence influence the interior of a vehicle? These and other design challenges of a new mobile world will be discussed on June 5th, 2014. More information under www.kreativ.region-stuttgart.de/nemo

Outlander test drive: American Green Car Reports had to go all the way to the UK for a chance to drive the Mitsubishi Outlander PHEV, since in the U.S., the plug-in will only be available in 2016. This delay (we reported) is also the Outlanders “biggest issue,” while it is otherwise “perfectly pleasant,” Antony Ingram believes. But he fears that the vehicle might appear outdated by the time it arrives in the States.
greencarreports.com

E-Golf review: Top Gear’s Sam Philip let the E-Golf spin its wheels, as he got carried away with the torque that makes the car feel faster than its spec suggests. Even though Philip only got 100 rather than VW’s declared 118 miles of range, he thinks “it’s the most convincing electric car ever made.”
topgear.com