NEVS is looking for investors: Financial problems at National Electric Vehicle Sweden, the Chinese company owning Saab, continue. NEVS now confirmed talks with two Asian OEMs, interested in coming on board. Rumour has it, these two might be Mahindra and Dongfeng.
thetruthaboutcars.com, saabsunited.com 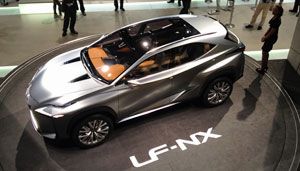 Toyota to take its time: Even though the Japanese carmaker sold 6,503 hybrids in the first quarter of this year in China, it has no concrete plans to set up a production line for its Lexus brand there. Despite 27% of all Lexus sold in China being hybrids, the brand is well behind the overall growth of its German competitors.
gasgoo.com

Sharing is caring: Tesla shares rose by almost nine percent last Monday, when news broke about a possible cooperation with BMW and maybe Nissan. With their value reaching 224.61 dollars, it was the highest closing price in two months.
wantinews.com

Spy shot of a ghost: At San Francisco Airport, a VW fan has spotted what appears to be a GTE plug-in hybrid estate – a model that is not even in production in Europe. But who knows what VW has got in the pipeline?!
golfgteforum.com via hybridcars.com