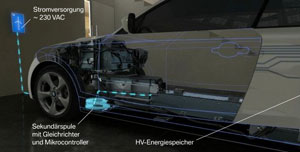 Premium inductive charging: BMW and Daimler will join their efforts to develop wireless charging. The system is said to charge at a power rate of 3.6 kW with 90% efficiency. Like the inductive charging system by Swiss supplier Brusa (we reported), the German system seems to work without any external wallbox. A coincidence? The technology might go into serial production in two or three years, according to Daimler.
electriccarsreport.com

New H2 tank: Researchers from DLR with partners have developed a sponge-like tank in which hydrogen can be stored at 70 bar and normal outside temperatures. Researchers of the EU project SSH2S were able to fit the entire system to an Iveco Daily van and use it as an auxiliary power unit. A high-temperature fuel cell was used, delivering electricity and the heat required to release the hydrogen from the storage materials.
chemistryviews.org, dlr.de

Indian solar car: SolarMobil is a team of 27 engineers from Manipal University, India, that have put together a solar-powered two-seater. The ‘Solar Electric Road Vehicle (SERVe)’ is said to have a “cruising speed” of up to 120 kph, and 60 kph when running on solar panels only. The team will race at the South African Solar Challenge (SASOL14).
auto.ndtv.com

Most clicked link on Tuesday was our Short Circuit about the “Toro.” A Renault Twizy upgrade for bumpy roads.
thegreencarwebsite.co.uk