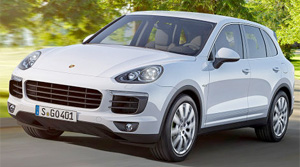 Cayenne plug-in hybrid: Porsche announced the launch date of its latest plug-in hybrid. In Germany, the Cayenne will hit the stores on October 11th, before launching in the States on November 1st. There, prices for the Cayenne S E-Hybrid start at 77,395 dollars. The Cayenne comes with a range of 23 miles and is powered by a V6 with 245 kW and an electric motor with 70 kW.
transportevolved.com, electriccarsreport.com

Meanwhile, the Porsche Panamera plug-in hybrid is getting cheaper and being offered for 6,000 euros (8,080 dollars) less in Germany and 3,000 dollars less in Canada. Pricing for other market has yet to be announced. Porsche gave synergistic effects as the reason for the lower reduction as now Panamera and Cayenne share the same powertrain.
auto123.com, wn.de (in German)

New BMW models for China: The German carmaker plans to bring the BMW 5-Series plug-in hybrid to China by the end of this year, according to CFO Friedrich Eichiner. Additionally, a second model is being developed with BMW JV partner Brilliance following the electric Zinoro 1E.
gasgoo.com

Honda NSX on fire: A prototype of the hybrid sportscar burned down during testing at Nürnburgring. The engineers could escape unhurt and while the cause of the fire has yet to be found, the NSX showed all characteristics of a “a mid-engine supercar, burning entirely up to the base of the windshield,” Auto Evolution reports.
autoevolution.com, autoblog.com

Livewire live: Harley Davidson has been touring the States to let fans and press test ride its electric motorbike. Ben Rich went to see what the concept bike is like. Harley says the Livewire will not enter production, but having built 40 demonstrator bikes and currently searching for a Livewire project manager, are clear signs that the bike manufacture is serious about electric motorcycles.
greencarreports.com

E-Bike motor made in Berlin: Brose has started the production of its pedelec drive unit in its facility in the German capital. The motor weighs 3.4 kg and generates up to 600 Watt peak power. The family-run automotive supplier hopes to acquire 20% share in the electric bicycle segment.
bike-eu.com