The Chevy Volt prove exceptional once more, as it is the only (!) model that has not had to be recalled by General Motors this year. The American company has had to admit safety issues with almost its entire range, forcing them to recall tens of millions of cars.
autonews.com via greencarreports.com 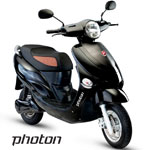 Low cost e-scooter for India: Hero Electric presented its latest electric scooter, the Photon, designed for the Indian market. It has a top speed of 45 kph and a said range of 80 kilometres. The Photon is priced at 54,110 rupees, that is less than 900 dollars, and will first be available in five cities across India.
indianautosblog.com

Brammo in Australia: ELMOFO (Electro Motive Force) has been appointed the importer and distributor for the electric motorcycles of Brammo in Australia. The company not only supplies but also designs and builds electric vehicles and EV components.
digitaljournal.com

Canadian i3 review: “Electric. Eclectic. Edgy i3. Goes fast. But not far,” is the short version of Kathy Renwald’s review of the BMW i3. However, she got much more to say as Renwald also gives details about the pricing for the Canadian market.
wheels.ca

Audi A3 e-tron: EV Fleetworld‘s Danny Coobs is looking at the Audi A e-tron’s suitability for fleets. Although the carmaker took its time to arrive in the plug-in market, Cobbs thinks “perhaps now is the time when the consensus of opinion will favour this type of drivetrain,” esp. as his verdict puts the e-tron above all other plug-in hybrids on the market.
evfleetworld.co.uk

Will Volt become a family? The new generation Volt is already loaded with expectation. It seems, however, as if they not all point in one direction but could give an indication that GM is planning a whole range of Volt models, similar to Toyota’s Prius, Transport Evolved muses.
transportevolved.com