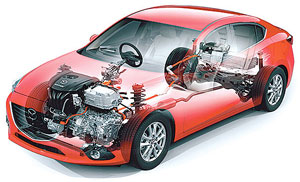 Mazda with diesel hybrids? Apparently, Mazda is planning to launch diesel hybrids in its domestic as well as European markets, the Japanese daily Yomiuri Shimbun reports. So far the carmaker only has the Mazda 3 with Toyota’s hybrid technology on offer and has been experimenting with rotary engine hybrids.
the-japan-news.com, greencarcongress.com

Improved separator: Researchers from Stanford University’s Cui Group were able to increase the capacity and cycling stability of lithium-sulphur (Li-S) batteries. Their idea was to apply a thin coating on the separator to prevent the inactive sulphur-related species layer from forming.
greencarcongress.com

Manganese cathodes: Apparently BYD plans to produce new high-energy batteries for the use in its electric vehicles as early as next year. To achieve better energy density, the Chinese battery maker will add manganese to its lithium iron phosphate cathode material. This could mean a 10 to 15% increase of range.
metal.com via greencarcongress.com

Most clicked link on Wednesday was the video of the kite-driven Volkswagen E-Up, putting a new meaning to EV sailing mode.
youtube.com