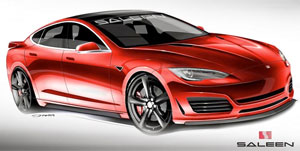 Showtime for Saleen: The carmaker will present its EV ‘Foursixteen’ this Sunday at the 2014 Pebble Beach Concours d’Elegance. It is Saleen’s first all-electric vehicle project and it is based on the Tesla Model S. No detailed information or technical specs have been released at this point, though the specialty manufacturer of high performance vehicles did promise more details and pictures ahead of the launch.
hybridcars.com, marketwired.com

Difficult relationship: According to Bloomberg, engineers of Tesla and Toyota were unable to work together and even clashing over minor details, such as the parking brake of the RAV4 EV. Tesla and Toyota co-developed the electric SUV, but it was anything but a sales hit. The Japanese are now focusing on fuel cells, a technology Elon Musk apparently “ridicules.”
bloomberg.com, insideevs.com

Saab escapes bankruptcy: Chinese company NEVS, which had bought the car brand, stopped its already limited production, saying it was unable to pay suppliers (we reported). Now, the supplier who had filed a petition trying to force NEVS to declare bankruptcy will withdraw that request.
online.wsj.com

Riese & Müller search fountain of youth: With a new design strategy for their e-bike ‘Culture,’ the German e-bike manufacturer hopes to target a younger clientele. The pedelec will be available in four categories and feature the Bosch Active Cruise system.
bike-eu.com

Testing the Mitsubishi Outlander PHEV: Carsguide seem to like the plug-in hybrid SUV and technology behind it, but wish for more ways to engage the driver. Since all systems are interconnected, he or she becomes “less of a driver and more of a machine operator.”
carsguide.com.au