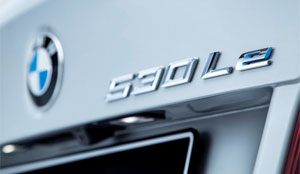 BMW 5 Series PHEV debut: The German carmaker has presented its 530Le at the Guangzhou Auto Show. The plug-in hybrid will be produced in China with JV partner Brilliance and is based on the long wheelbase 5 Series. The BMW 530Le combines a four-cylinder engine with an electric motor for an overall power output of 200 kW and is said to have a range of 36 miles (58 km).
bmwblog.com, autoevolution.com

New Caddy ELR delayed? Cadillac did not bring the new ELR to the LA Auto Show as expected but displayed the current model instead. ‘GM Inside’ believes the reason being Caddy trying to turn the new ELR into a “highly autonomous vehicle” after Tesla presented its Autopilot system.
gminsidenews.com via insideevs.com

Toyota Ranz EV: At Guangzhou Auto Show, Toyota showcased the Ranz EV in what seems to be a production ready version. The all-electric sedan is based on the Corolla and developed together with FAW. However, Toyota confirmed the ‘Leahead’ EV brand together with GAC, which will presumably beat Ranz to the market next year.
indianautosblog.com

Model S enhanced: Saleen has begun deliveries of its tuned Tesla Model S with prices starting at 132,000 dollars. The tuner also plans to modify the upcoming AWD Tesla and expects its version to go from 0 – 60 mph in less than three seconds. In the meantime, “Jalopnik” reports that Saleen is running out of cash and owes more than 5m dollars, which includes about 500,000 dollars in payroll taxes.
soec.org, saleen.com, jalopnik.com (financial situation)

Kandi EV gets the go: Kandi Technologies has got the approval of the Chinese Ministry of Industry and Information Technology (MIIT) to bring its new model SMA7002BEV05 to market. Buyers of the electric SUV are thus eligible for all national and local subsidies and incentives.
money.cnn.com, newsfilecorp.com (picture)

EVs made in and for Malaysia: Malaysian Automotive Institute says it will develop prototypes of two electric sedans for 2015. Set to launch by 2016 and 2017, the EVs shall come at a price tag of less than 100,000 ringgits (about 30,000 dollars). To keep costs down, the institute considers battery leasing.
therakyatpost.com