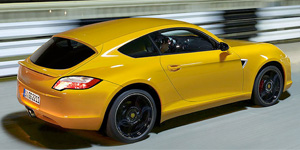 Electric Porsche in 2018/19: According to German magazine auto motor und sport, Porsche has cancelled the Pajun, a smaller version of the Panamera originally planned for 2016. Instead, it will release the car as a pure-electric model two or three years later to take on Tesla. Porsche hopes that by then, the range can be increased to at least 350 to 400 kilometers with better batteries.
auto-motor-und-sport.de (in German)

China gets new JV for EVs: Carmaker Geely and manufacturer of micro electric cars Xindayang are forming a joint venture to focus on the production of all-electric sedans. A total of 161 million dollars will be invested and the partners hope to turn out 50,000 to 100,000 EVs this year. In 2013, Geely had already formed a joint venture with Kandi for the production of small electric buses.
wantchinatimes.com, just-auto.com

Prius-fighter spyshots: As previously reported, Hyundai is working on a new hybrid-only model to challenge the Toyota Prius. Now, pictures have been posted online, allegedly showing the upcoming Prius-fighter from South Korea.
paultan.org

No Infiniti EV? While the carmaker has not openly said that it is putting its LE Concept on ice, rumour has it that Infiniti is doing exactly that since there has been no update after the car was first presented in 2012. Others think the manufacturer will wait until the next-gen Nissan Leaf hits the road in 2017.
hybridcars.com, greencarreports.com