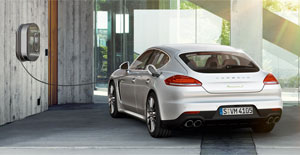 Meet the electric Porsche: Industry insider Georg Kacher delivers an update on the 717 aka the “Tesla fighter”. According to his sources, this purely electric Porsche will be driven by two electric motors powering the front and rear and will be able to go for at least 300 miles on one charge. However, the Porsche 717 still has a long way to go as its launch is set for 2019 at the earliest. Inductive charging technology will be developed by VW and the American Quantumspace.
carmagazine.co.uk

iCar update: Apparently, Apple’s Titan project (we reported) is much more than “just” an electric car. It is a “software game” instead as the company is looking into autonomous vehicle technology, Reuters reports quoting inside sources. The IT giant is said to be in talks with automotive experts.
reuters.com

Plug-in Chrysler in 2016: Chrysler’s ‘Town&Country’ minivan has been confirmed as plug-in hybrid for next year, a spokesperson for Fiat Chrysler said at the Chicago Auto Show. If all goes to plan, the PHEV minivan will be introduced at the NAIAS in Detroit in January 2016.
thedetroitbureau.com, hybridcars.com

Citroën hybrid facelift: The French carmaker´s subsidiary brand DS will unveil an updated version of its DS5 at next month’s Motor Show in Geneva. While the hybrid drivetrain stays the same diesel-hybrid as before, the system now goes under the name “Hybrid 4×4” with 200 hp.
autovolt-magazine.com, autoevolution.com

Tesla goes Indonesia: Prestige Motorcars, a dealership from Jakarta, is now taking orders for the Tesla Model S. First deliveries to Indonesia can be expected in April. Prestige Motorcars offers a home charging station but buyers will have to pay between 140,000 and 190,000 dollars for the electric sedan.
thejakartaglobe.com