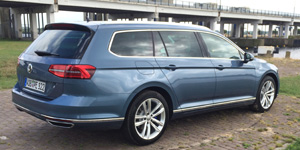 Plug-in Passat to come in autumn: VW officially presented its Passat GTE. Its system has a combined output of 160 kW and one charge allows for 50 kilometres of electric driving. It has four operating modes that range from electric to charging. The PHEV will launch in Europe this autumn and will also arrive in Asia later this year.
greencarcongress.com, electriccarsreport.com, autoblog.com

BorgWarner to acquire Remy: The U.S. supplier entered into a definitive agreement to take over Remy for 1.2 billion dollars. BorgWarner intends to strengthen its position in the growing market of electric drive trains, which Remy produces among other components. The deal will be finalised this year.
reuters.com, chargedevs.com

Volvo buys Polestar: Polestar, a Swedish high performance car company, has been collaborating with Volvo for many years. The carmaker now plans to utilise the former to launch particularly powerful models with a focus on its own twin engine plug-in hybrid technology.
motoringresearch.com, greencarcongress.com, digitaltrends.com