Hypersonic hydrogen jet: Airbus has patented a plane that could fly from Paris to Tokyo in less than three hours. The hydrogen-fueled Concord successor would use three different types of engines, including rocket boosters, to jump above the atmosphere. However, so far, the jet is just a concept.
theguardian.com 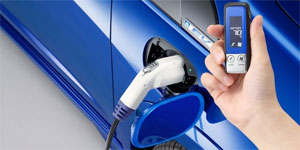 EV emergency response: Honda and Tottori University started field testing Honda’s Power Exporter CONCEPT 9000. The Inverter is designed to power external devices with up to 9 kW and could thus transform EVs and FCVs into mobile energy sources during disasters.
responsejp.com

Quantum batteries? Quantum physics migth eventually provide a leap in battery technology, as researchers explore the quantum battery or “quantacell.” The latter could lead to a speedup through quantum entanglement, which provides shortcuts between charged and uncharged qubits. The denser the qubit thicket, the faster the charging.
phys.org, extremetech.com