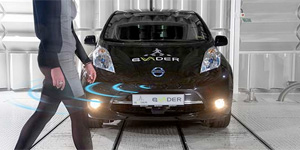 EVs to attract attention: Nissan has teamed up with ten other consortium members in the European Commission-led project eVADER to create an alert system for EVs, which produces audible cues to alert pedestrians and other road users to the presence of an electric vehicle, whilst having as little impact as possible on ambient noise levels. The research and results collated from this project could be utilised to shape future EU legislation on EV pedestrian alert sounds.
electriccarsreport.com

Tesla kicks off Autopilot testing: The carmaker has begun uploading the latest version of its Autopilot software to a select group of its Model S electric cars with the drivers acting as beta testers, according to a report from IEEE Spectrum. If all goes well, Tesla could roll out the technology later this year.
spectrum.ieee.org

EV battery market: LG Chem could overtake EV battery leader Panasonic in 2020, if it can accelerate sales of plug-in hybrids with German manufacturers and win over Nissan, according to Lux Research. The analysts expect that the market will reach a volume of 30 billion dollars by the end of the decade.
greencarcongress.com

EV battery research: Researchers at MIT and Samsung consider solid-state electrolytes to be the crucial element for significantly better EV batteries. The scientists say that solid electrolytes allow for higher power density, work well in cold weather and are not flammable.
electric-vehiclenews.com

Most clicked Link on Tuesday was our short circuit about a baby stroller that brakes and keeps distance automatically.
youtube.com