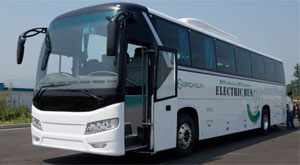 Long range electric bus: Four prototype electric buses unveiled in Melbourne, Australia, by company Brighsun have a certified range of 1,004 km, meaning they can drive from Melbourne to Sydney on one charge. It took four years to develop the system that includes regenerative breaking and Brightsun now plans to open bus manufacturing sites across the country.
onestepoffthegrid.com.au, busnews.com.au

Future-safe batteries: Defining a new cell standard, BMW is planing 50 years ahead for the replacement and upgrade of EV batteries. BMW’s head of development Klaus Fröhlich explained that even if the chemistry and energy density changes, the cell size remains the same. New batteries could therefore be easily fitted to older electric cars.
engineeringnews.co.za via bmwblog.com

Li-air battery progress: Researchers at the University of Cambridge have created a laboratory demonstrator of a lithium-oxygen battery. It shows high energy density, has an efficiency rate of more than 90%, and can be recharged more than 2,000 times. Scientists added lithium iodide to the dimethoxyethane to form and remove large crystalline LiOH.
sciencemag.org, greencarcongress.com

Dedicated hybrid engine: Hyundai introduced a new 1.6-liter GDI engine specifically made for hybrids together with an eight-speed automatic transmission for its front-wheel-drive vehicles. The motor is said to exhibit 30 to 40 percent better thermal efficiency and boasts 104 hp.
hybridcars.com