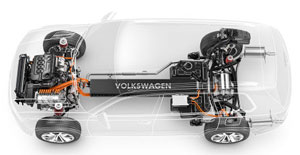 Open letter: Elon Musk and 44 other entrepreneurs and investors suggested in an open letter to the California Air Resources Board that it should not simply make VW pay penalties. Instead, VW should reinvest the money to accelerate electrification by stepping up research and development or production capacities.
autoblog.com, greencarreports.com, insideevs.com

Tax credit for e-motorcycles extended: The U.S. tax credit for two- and three-wheeled plug-in motorcycles comes back to life, after being scrapped in 2013. Therefore, all motorcycles with a 4 kWh or larger battery pack and electric driving capabilities of at least 45 mph will benefit from a 10 percent tax credit (up to 2,500 dollars of the purchase price).
prnewswire.com via insideevs.com

First Model X Signature delivered: Tesla has delivered a Model X Signature edition which starts at 132,000 dollars. So far, just over 30 of the Founder editions had been delivered. Meanwhile, the EV pioneer is setting up shop in South Korea, where it founded Tesla Korea Ltd. When it will officially launch has not been announced yet.
hybridcars.com, insideevs.com (Signature), yonhapnews.co.kr, koreatimes.co.kr (South Korea)

Acura NSX priced in the U.S.: Honda’s hybrid supercar will range from 156,000 to 205,700 dollars. Acura has also released a first teaser image of the Precision concept car, which it will showcase in Detroit next month. The concept is said to not preview a specific new model, but the design language that Acura plans to adopt for its upcoming sedans.
puregreencars.com, carscoops.com, autocar.co.uk (NSX pricing), worldcarfans.com, carscoops.com (Precision concept)