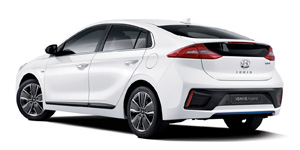 Hyundai Ioniq update: Hyundai has released first images of its Ioniq, which will be available as an EV and a hybrid with and without plug. The hybrid will be powered by a 1.6 litre and 105 hp petrol engine, combined with a 32 kW electric motor. Pricing in South Korea is said to start at just 22.9m won (19,127 USD). The Hyundai will premier in Geneva and New York in March.
autocar.co.uk, indianautosblog.com

Chevy Bolt overview: Following the unveiling of Chevrolet’s new EV at the CES in Las Vegas yesterday, here are the official presentation video, specs and more pictures to scroll through. The Bolt will go on sale at the end of the year and will feature lots of driving assistants and maximum connectivity to appeal to younger generations.
youtube.com (official video), chevrolet.com (official website), forbes.com (photos)

Mellow Boards gets cash injection: The Hamburg-based start-up (we reported) has received 1.5m euros from TQ Systems, securing enough financing until the start of production. Mellow Boards says it will most likely be able to stay on schedule, with deliveries said to start in September.
Source: info per mail

Mini with plug? According to German Auto Motor und Sport, the new Mini Countryman will be available from the end of the year. A plug-in variant is to follow at a later date, but will have an all-electric range of a mere 34 km.
auto-motor-und-sport.de (in German)

Baojun E100 spy shots: The small city EV said to premier at the Beijing Auto Show in April, was caught on camera. The Baojun E100 will then launch in China in October, have a range of 100 km an top speed of 100 kph. And it apparently comes with a takeout tablet on the dashboard.
carnewschina.com

Electric car sales in the U.S.